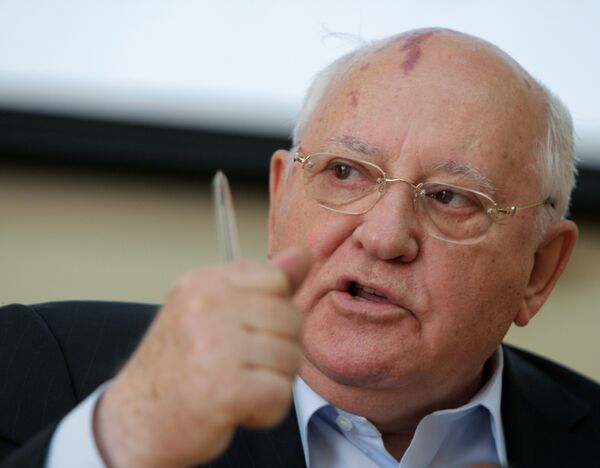 In just 5 years and 4 days, Gorbachev managed to shake the foundation of the country and the entire world.

The era of perestroika was born exactly 25 years ago, although no one noticed at the time. The word "perestroika" was coined later to contrast Gorbachev's rule with the "era of stagnation."

The relatively young Gorbachev - who was 54 years old when he assumed power in 1985 - was an attractive prospect compared to the Kremlin elders who ruled the country "without ever regaining consciousness," to quote a popular political joke of the time. His relative youth brought with it the popular hope that the country would undergo at least some degree of modernization.

Although the winds of change were already howling by 1990, the more radical elements in society wanted to go even further. The mood is captured by the title of the play "On and On and On" by the young perestroika-era playwright Mikhail Shatrov, who offered a fresh view of the first Soviet leader Vladimir Lenin (1870-1924).

The state and society had already changed beyond recognition, as highlighted by the striking transformation of the country's electoral system.

It came as no surprise when in March 1990 Gorbachev was nominated as the sole candidate for the president of the USSR. Millions of Soviets tuned in to watch as the delegates at an extraordinary Congress of People's Deputies cast their ballots on live television.

It almost looked like a real parliament. The delegates were unafraid to express their views and voice their concerns. Some asked provocative questions. Nor was the vote unanimous. Gorbachev was supported by 1,329 delegates (59.2%), with 495 voting no.

Some Russian presidential candidates have received more votes, albeit during general elections.

Could Gorbachev have withstood nationwide elections? The answer remains in the realm of alternative history, as Gorbachev simply saw no need to hold such elections. However, in the spring of 1990 Gorbachev would have had a good chance of winning in Russia and throughout the Soviet Union.

Gorbachev had a complicated and contradictory relationship with his electorate. He gained rapid popularity among intellectuals and managed to hold on to this segment of society for five years. Their support was based primarily on glasnost, Gorbachev's policy of openness and transparency. Glasnost also won Gorbachev many followers among the broader public, who enjoyed when high-ranking officials were openly criticized and punished.

However, the people also bore grudges against the reformer Gorbachev. Most Soviets associated the beginning of perestroika with the May 16, 1985 Decree of the Presidium of the Supreme Soviet of the USSR "On Greater Efforts to Combat Drunkenness and Alcoholism and to Eradicate Moonshine."

Of course, not everyone opposed this move. Women, for example, approved of these policies. However, Russian officials can turn even reasonable proposals into something absurd, like hypocritical "alcohol-free" weddings.

I remember during a meeting of our editorial office, the table was covered with soft drinks, snacks and appetizers, but we were secretly pouring vodka under the table.

Our superiors were on to us, but they only demanded that we act sober. The anti-alcohol campaign implied that "high society does not punish delusions as long as they remain a secret," to quote the famous Russian writer Alexander Griboyedov (1795-1829).

Oddly enough, both the 1917 and 1991 Russian revolutions came on the heels of an official crackdown on drunkenness and alcoholism. A prohibition law was introduced in the Russian Empire in 1913, but it was not strictly enforced either. The Soviet Union collapsed several years after the start of Gorbachev's anti-alcohol campaign.

Is there a connection? As the old Latin saying goes, "Correlation does not imply causation."

Regardless, this funny coincidence was reinforced in the popular imagination by a joke that caught on soon after 1985: "An urgent telegram is sent to the Kremlin from a district center in Siberia: 'Request two railcars of vodka ASAP. The people have sobered up and want to know where the Tsar is.'"

There is probably a grain of truth in this joke, because revolutions are the work of sober-minded people. Although the anti-alcohol campaign was virtually over by March 1990, there was still no revolution in sight. Those at the top could at least do something, while those at the bottom would not want it so much, to paraphrase that great student of revolutions, Vladimir Lenin.

By March 1990, after 5 years in power, Gorbachev had reached his political peak. Down was the only direction left to go.