A Soviet journalist’s recollections of Cuba 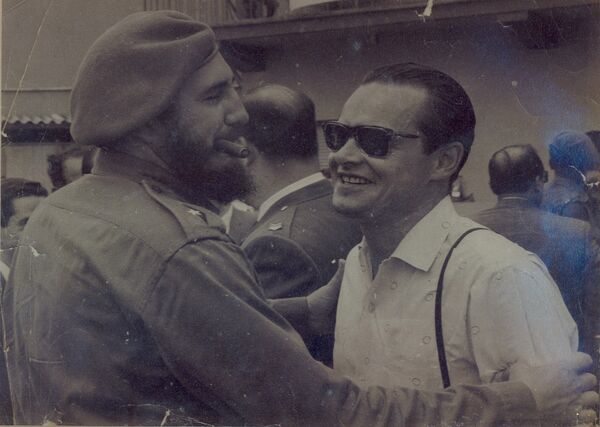 Subscribe
On May 8, Russia and Cuba will mark 50 years since diplomatic ties were established between the two countries. We start a series of stories marking the event with recollections of Leonid Kamynin, a correspondent of Soviet daily Izvestia’s in Cuba in the early 1960s

On May 8, Russia and Cuba will mark 50 years since diplomatic ties were established between the two countries. We start a series of stories marking the event with recollections of Leonid Kamynin, a correspondent of Soviet daily Izvestia’s in Cuba in the early 1960s

Even before Moscow and Havana officially re-established diplomatic relations, Cuba and the Soviet Union had developed a surprisingly close bond, which could be characterized as “love at first sight.”

The Soviet people, brought up in the spirit of internationalism, had a sincere desire to support the distant Caribbean nation that had overthrown its dictatorial regime and freed itself from U.S. dominance only to face a U.S. embargo and military threats.  What is most significant is that the upsurge of sympathy for the Cuban people took place at the purely human level. Our people saw in the Cubans a courageous people challenging a powerful neighbor that had called the shots in their country for decades. They saw a people who are open, good-natured and filled with zest for life, a people that bears hardship with dignity and celebrate every festive occasion to the fullest. In the months following the revolution, Cuba seemed less an island than an endless sea of triumphant celebration. The nation rejoiced in the freedom and independence it won for itself under Fidel Castro’s leadership. The Soviet people celebrated with the Cubans, while at the same harboring deep dissatisfaction with the bureaucratic model of socialism that had taken root in their own country.

At the same time, news of the distant Soviet power came as a revelation to the Cubans. They knew almost nothing about the Soviet Union at the time. The Cubans discovered that they were not alone, that there was a country they could count on as a loyal friend as they set out on their difficult new path.  The words Rusia, Sovieticos and Moscu were suddenly on everyone’s lips, like an incantation that would help them bear their hardships. The Soviet Union’s decision to begin importing Cuban sugar was indeed very helpful. Sugar was Cuba’s main export, and the United States was refusing to buy it in an effort to weaken the economy of their insubordinate neighbor to the south.

You’d be hard-pressed to find another example in history where a groundswell of mutual sympathy and affection preceded the establishment of diplomatic relations, but this is exactly what happened between Cuba and the Soviet Union.

I was fortunate enough to witness this all firsthand as a correspondent for Izvestia. Our newspaper was the first Soviet publication to open an office in Havana. And I must admit that it was pleasant and quite touching to see how interested the Cubans were in my work and in me personally, one of Sovieticos, as they called us back then. The proud and dignified Cubans were not shy with their friendship. I remember one time not long after our countries restored diplomatic relations our ocean liner brought about a thousand young people to Havana. They came to help Cubans harvest sugar cane. The hospitable Cubans filled up the entire embankment to give the young Sovieticos a warm welcome. Our guys did not even know how to use a machete, but they were so enthusiastic that the Cubans joked that there would be enough Cuban sugar for the whole world.

The liner’s captain hosted a gala reception on the deck of the ship to commemorate this important event. When Castro and his comrades arrived they were surprised to see that our diplomats and others were dressed in dark suits and ties according to protocol. It was very hot -- +30C and humid like a sauna. Castro smiled broadly and said, “Por favor, sin corbatas!” (“No ties, please!”). There should be no protocol or formality among friends.

Meanwhile workers and engineers at an agricultural machinery factory in far-off Rostov were working hard to produce combines to harvest the sugar cane crop. Before long the combines arrived on Cuban plantations.

…Years passed and our press and liberal politicians began to grumble about how our relationship with Cuba was not being mutually beneficial. True, Cuba is a small country without many natural resources, and the United States still has not lifted its embargo. But there are many examples of why this criticism is unfair. When a devastating earthquake struck Armenia in 1988, Cuba sent a large team of doctors along with its unique medical equipment. Cuba’s pride in its medical achievements is well founded.

The new times call for new principles in our relations with other countries. Our diplomacy is now rooted in pragmatism and national interest. But these extraordinary events of 50 years ago that defined our special relationship with Cuba have left an indelible mark on history and our memories.