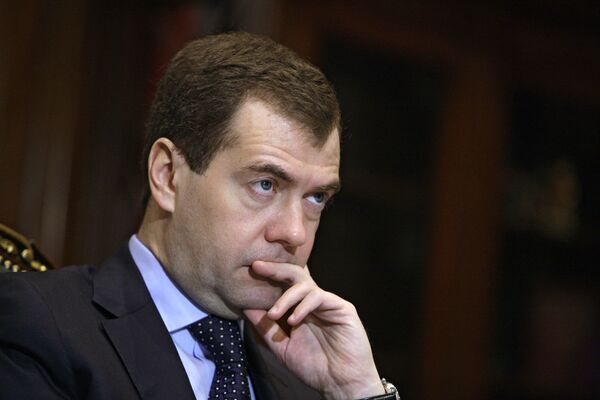 The crash, which provoked public outrage, caused the deaths of a well-known gynecologist, Vera Sidelnikova, and her daughter-in-law, Olga Alexandrina, also a doctor.

The accident occurred on February 25 on Moscow's Leninsky Prospekt when the chauffeur-driven Mercedes of the LUKoil executive, Anatoly Barkov, collided with the small Citroen driven by Alexandrina.

"The president has ordered Interior Minister Rashid Nurgaliyev to enquire into all the circumstances of this tragedy and report back," Natalia Timakova said.

She added that Medvedev was aware of the open letter addressed to him by some dozen Russian cultural elites.

The letter, written by novelist and outspoken feminist Maria Arbatova, accused police of being biased and hushing up the details of the investigation.

"The information which has come from police to the press is a mockery of the doctors' memory," the letter said.

It went on to point out the extensive breaches of the legal proceedings, as police opened a criminal case after a two-day delay, and denied the relatives of the deceased access to the details of the case.

The letter lamented the "double standard" which has ruled Russia's roads over the past few years, with the rich and powerful posing a threat to the general public.

It ended with an address to Dmitry Medvedev.

"Dear Mr. President! You are a guarantor of our Constitution and a professional lawyer. If you take the case under your personal control and punish the person responsible for the crash, you will prove your commitment to the fight against corruption."

The official report, backed by LUKoil, said the small Citroen driven by Alexandrina swerved into the oncoming lane and hit the Mercedes head-on. The family says the oil executive's car pulled out into oncoming traffic to get past one of Moscow's notorious traffic jams, and they will take their case to court.

Police at first said there were no video recordings. The newly found recording shows a car resembling Barkov's Mercedes making a move toward the median lane that divides the traffic. The moment of the crash cannot be seen as the impact zone is hidden behind a billboard.

However, Igor Turnov, a lawyer representing Sidelnikova's son, Sergei, claimed that there were at least 15 cameras which were not mentioned by police near the site of the accident.

The case has struck a chord with the Russian public, who spend hours sitting in traffic jams while the rich and powerful speed past.

Official statistics showed nearly 30,000 people died on Russia's roads in 2008, and Medvedev has blamed the carnage on the poor state of the country's roads, as well as a "lack of discipline, and the criminal negligence of drivers."