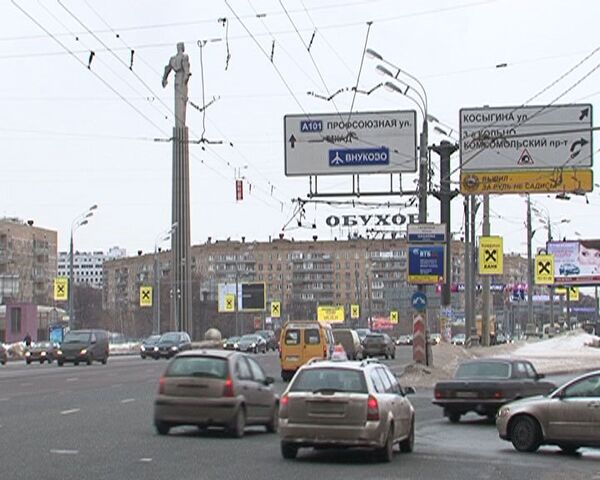 The letter comes as Medvedev launched an overall reform of the Interior Ministry, trimming police numbers and raising salaries in an effort to reduce corruption.

The crash caused the deaths of a well-known gynecologist, Vera Sidelnikova, and her daughter-in-law, Olga Alexandrina, also a doctor.

The accident occurred on February 25 on Moscow's Leninsky Prospekt when the chauffeur-driven Mercedes of a vice-president of Russia's largest independent oil company, LUKoil, collided with the small Citroen driven by Alexandrina.

The letter, written by novelist and outspoken feminist Maria Arbatova, accused police of being biased and hushing up the details of the investigation.

"The information which has come from police to the press is a mockery of the doctors' memory. At first, police said that the late Olga Alexandrina was to blame for the crash, then that surveillance cameras weren't working near the scene of the accident, then that they did have a video recording, but it would not be shown to anybody," the letter said.

"A large group of people came to the site of the accident on behalf of Barkov and changed the vehicle's license plates," it went on. "A criminal case was opened after a two-day delay, and the cars were returned to their owners after the crash, rather than being taken to an impound."

Arbatova added that Stanislav Lagoyko, the police officer in charge of the investigation, denied the relatives of the deceased access to the details of the case.

The late Sidelnikova was a distinguished professor of gynecology, academic, and founder of a new approach to the treatment of troubled pregnancy. She personally delivered Arbatova's two sons.

Her daughter-in-law, Olga Alexandrina, was also a gynecologist, and left behind a small daughter, who is only 18 months old.

"There was neither big money nor high executives to support them. But there are thousands of people who came into this world with their help, thousands of happy mothers, thousands of students and disciples, and also millions of Russians who are sick and tired of the caste system on the roads," the letter said.

The letter lamented the "double standard" which has ruled Russia's roads over the past few years, with the rich and powerful posing a threat to the general public.

It ended with an address to Dmitry Medvedev.

"Dear Mr. President! You are a guarantor of our Constitution and a professional lawyer. If you take the case under your personal control and punish the person responsible for the crash, you will prove your commitment to the fight against corruption."

The official report, backed by LUKoil, said the small Citroen driven by Alexandrina swerved into the oncoming lane and hit the Mercedes head-on. The family says the oil executive's car pulled out into oncoming traffic to get past one of Moscow's notorious traffic jams, and they will take their case to court.

Police at first said there were no video recordings. The newly found recording shows a car resembling Barkov's Mercedes making a move toward the median lane that divides the traffic. The moment of the crash cannot be seen as the impact zone is hidden behind an ad poster.

However, Igor Turnov, a lawyer representing Sidelnikova's son, Sergei, claimed that there were at least 15 cameras which were not mentioned by police near the site of the accident.

He said that Lagoyko's unwillingness to make the details of the case open to the public is a "violation of the law."

The case has struck a chord with the Russian public, who spend hours sitting in traffic jams while the rich and powerful speed past.

Official statistics showed nearly 30,000 people died on Russia's roads in 2008, and Medvedev has blamed the carnage on the poor state of the country's roads, as well as a "lack of discipline, and the criminal negligence of drivers."