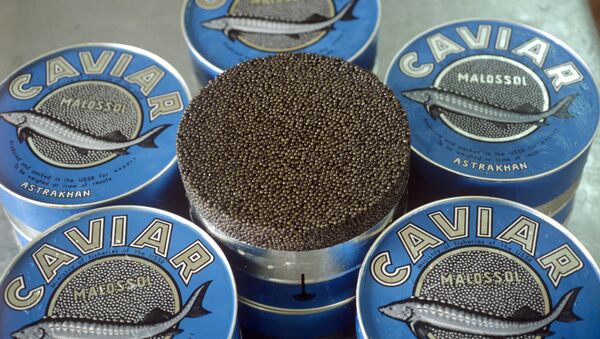 Argentina plans to open a Russian-sponsored sturgeon farm to produce black caviar within the next two weeks.

Argentina plans to open a Russian-sponsored sturgeon farm to produce black caviar within the next two weeks, according to a press statement released on Tuesday by the Argentinean province La Rioja.

Within the next 15 days, Russia will send sturgeon roe to the northwestern Argentinean province, where they will hatch the smolt, grow the fish to the desired size, and after eight years will harvest some 10 tons of black caviar annually.

The province's governor, Luis Beder Herrera, and a representative of the Russian company, Facundo Fredes, signed on Tuesday a 15-year concession agreement to develop the enterprise in the village of Anillaco.

"There are excellent climactic conditions here for raising sturgeon which has been supported by laboratory analyses," the head of the provincial environmental service, Nito Brizuela, said.

Argentina's sturgeon farm for producing Russian black caviar will be the second in South America. The first joint-venture farm was established 10 years ago in Baygorria, Uruguay, on the Rio Negro River. Scientists from the Russian region of Astrakhan helped the Uruguayans establish that farm. They sell their local black caviar in the United States and Argentina for around $3,000 per kilogram.

In 2007, Russia banned the harvest and sale of black caviar which extended the 2002 ban on commercial sturgeon fishing in the Caspian Sea.

The Caspian Sea sturgeon, caught in five coastal states (Russia, Azerbaijan, Kazakhstan, Turkmenistan and Iran) accounts for almost 90% of the world's black caviar. According to Russian experts, it will take at least 10 years to restore the sturgeon population in Russian waters.