The Armenian genocide: A case of selective memory 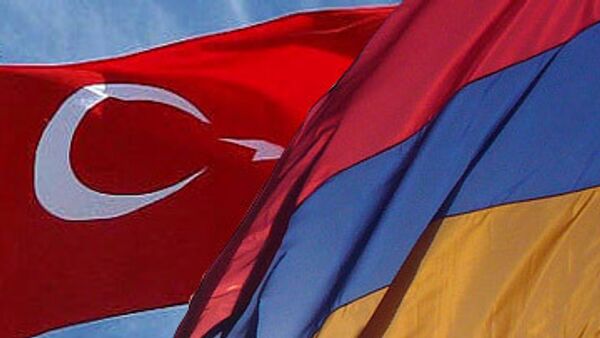 © Сollage by RIA Novosti
Subscribe
A resolution on the Armenian genocide in the Ottoman Empire, passed by the U.S. House Committee on Foreign Relations, has raised a real storm in international diplomacy.

A resolution on the Armenian genocide in the Ottoman Empire, passed by the U.S. House Committee on Foreign Relations, has raised a real storm in international diplomacy.

Feverish diplomatic activity and apparent hesitations of the U.S. administration are a clear sign that Turkey's foreign policy influence has grown.

The committee's resolution is non-binding and it is not clear if it will be placed before the whole house, but Turkey has already recalled its ambassador to Ankara for consultations, while U.S. Secretary of State Hillary Clinton, according to The New York Times, has asked the Congress not to take up this delicate matter now.

When, in 1915, 1.5 million Armenians "disappeared" as a result of the action undertaken by the Young Turks' government, Turkey and Armenia froze all contacts with each other. It was only last year that signs of thawing first became manifest, and in the fall of 2009 the sides agreed to establish diplomatic relations. This was viewed as a success for the Turkish leadership, both the prime minister and the president. Will now a final "thaw" be postponed again?

That is not likely, although Turkish politicians are certain to take advantage of the situation to improve their standing.

It is very likely that the current scandal will only boost the prestige of Turkey's Prime Minister Recep Tayyip Erdogan. Not so long ago, he was the first politician in Turkish history to challenge the military, saying he uncovered a military plot initially scheduled for 2003. Before that, Erdogan made out a successful case for the Palestinians as Muslim brothers, harshly criticizing Israel for its Gaza Strip operation. During the U.S. Iraqi campaign, Turkey never allowed American troops to pass through its territory, forcing Washington to invade Iraq only from the south.

Now the ambiguous position the U.S. has maintained for years on the Armenian genocide, which helped Washington to draw Turkey into NATO, is beginning to backfire against U.S. interests. This is a good lesson for all, and it is not limited to the events of 1915. There are other examples. The Western mass media are still keeping silent about anti-Armenian violence in Baku in 1989-1990. Most reports mention only that Soviet troops were introduced into the city.

The reason for such selective memory in American and West European media is understandable: it is simple to place the blame on Moscow, forgetting all about previous events. At that moment, the troops sent by Moscow saved the lives of thousands of Armenians and other "Russian speakers" in Baku. Even many Russian media find the subject of the violence in Baku unpopular and almost forbidden. Some say this could lose Russia advertising contracts and lead to conflicts with influential people.

"I do not know what has to be done to get the mass media throughout the world to highlight those events," says political analyst Andronik Migranyan, a member of Russia's Public Chamber. "Will Armenia itself have to carry out PR campaigns to make things change?"

The point is that the events of 1915 and those of the 1980s in Armenia and Azerbaijan do not concern only Armenians; they concern everyone. The anti-Armenian violence in Baku came after an inhumane expulsion of Azerbaijanians from Nagorny Karabakh, followed by the Khodzhala tragedy that shocked the world. People must remember everything, because destruction of human life cannot be forgotten or remembered selectively. Otherwise, diplomatic embarrassments like the present U.S.-Turkish spat may become regular.