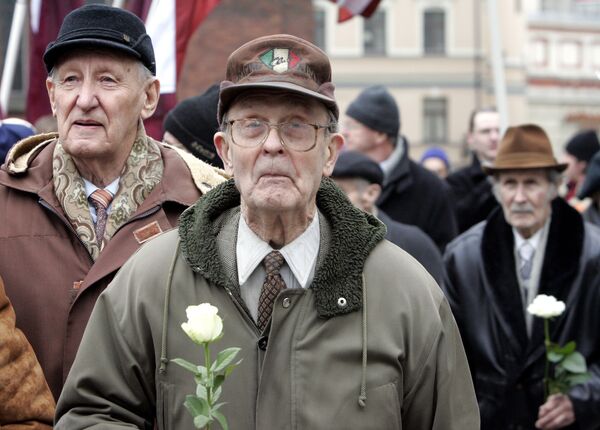 © RIA Novosti . Oksana Djadan
/
Go to the photo bank
Subscribe
Latvia's ruling New Era party said on Sunday it would appeal against a decision by the Latvian capital's legislature to ban a demonstration by Waffen SS veterans and their supporters on March 16.

Latvia's ruling New Era party said on Sunday it would appeal against a decision by the Latvian capital's legislature to ban a demonstration by Waffen SS veterans and their supporters on March 16.

The decision to ban the Waffen SS veterans demonstration was made by the Riga Duma on Friday.

The New Era party argued on its web site that the ban on the Waffen SS march violated the fundamental democratic rights of the freedom of meetings, incited national strife and exacerbated relations in Latvian society.

Latvia annually holds demonstrations by former legionnaires of the Latvian Waffen SS legion on March 16. The Baltic state's president said two years ago that he did not consider the legionnaires, many of whom participated in mass killings of Jews, to be Nazis.

The country's antifascist organizations and opposition parties hold protests and try to prevent demonstrations, which sometimes results in clashes.

The Riga Duma banned all events dedicated to the anniversary of the Latvian Waffen SS legion's establishment after being advised to do so by law enforcement agencies.

The WWII continues to be a contentious issue in relations between Russia and both Estonia and Latvia, over the Baltic states' perceived glorification of Nazi collaborators.

Parades in honor of Waffen-SS veterans, involving veterans from the Latvian Legion and the 20th Estonian SS Division and their supporters, are held annually in the two Baltic states.

In April 2007, Tallinn was hit by mass protests after the Estonian authorities ordered the removal of a Soviet WWII monument, along with the graves of Soviet soldiers who fought against Hitler's forces.