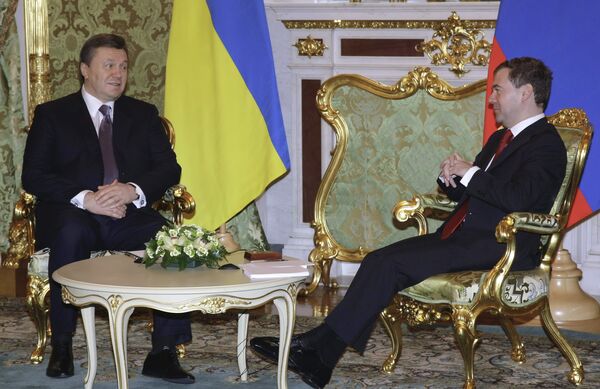 Russian President Dmitry Medvedev and his new Ukrainian counterpart Viktor Yanukovych promised on Friday a big improvement in ties between Moscow and Kiev.

Russian President Dmitry Medvedev and his new Ukrainian counterpart Viktor Yanukovych promised on Friday a big improvement in ties between Moscow and Kiev.

The leaders of the two neighboring states met in Moscow to discuss bilateral relations following Yanukovych's victory in the Ukrainian presidential elections.

Yanukovych, who was sworn in on February 25, has pledged to steer a more balanced policy towards Russia than his predecessor Viktor Yushchenko, whose pro-Western policies, including a bid to take Ukraine into NATO, saw a rapid deterioration in bilateral ties.

"In recent years, relations between our countries have not been just stagnated, they have degraded," Medvedev said during a news conference after the meeting.

"We are talking about the reviving of these relations through drastic and effective means," he said.

Medvedev said a Russian-Ukrainian interstate commission would be established in the near future to boost ties.

The Ukrainian and Russian governments will also hold talks on energy cooperation, including in the gas sphere, he added.

The Russian leader also said Moscow and Kiev would continue discussions on the future of Russia's Black Sea Fleet base on the Crimean Peninsula.

"We agreed... that all consultations based on the current agreements, which were signed in 1997, would continue," he said.

Yushchenko vowed that Russia would have to find a new main base for its Black Sea Fleet once the current deal expires in 2017.

On Ukraine's relations with NATO, Yanukovych said his country, as a non-aligned state, would cooperate with the alliance "on the base of national interests."

"It will always be this way," he said.

The new Ukrainian leader, whose power base is in the mainly Russian-speaking eastern and southern industrial parts of the country, also pledged to take steps to assure the right of Ukrainians to speak Russian, something his predecessor had suppressed.

"I am sure that Ukrainian people are wise... They understand that comfortable conditions should be created for all nationalities living in Ukraine," he said, adding corresponding laws would be adopted in the near future.