'Nazi hero' controversy to be settled by Victory Day - Yanukovych 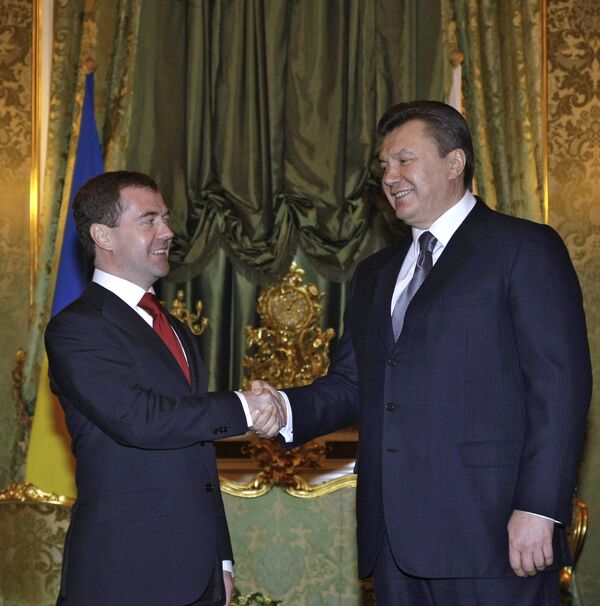 © RIA Novosti
/
Go to the photo bank
Subscribe
Ukrainian President Viktor Yanukovych said on Friday the controversy over his predecessor's naming a onetime Nazi collaborator a national hero would be settled before this year's Victory Day.

Ukrainian President Viktor Yanukovych said on Friday the controversy over his predecessor's naming a onetime Nazi collaborator a national hero would be settled before this year's Victory Day.

Former Ukrainian President Viktor Yushchenko, known for his promotion of Ukrainian nationalism, often at the expense of relations with Russia, awarded in late January amid much media hysteria the honorary title of Hero of Ukraine to Stepan Bandera, whose Organization of Ukrainian Nationalists briefly allied with Nazi Germany during the 1941 invasion of the Soviet Union.

"Of course, they [Yushchenko's decrees] have caused much resonance, but those decrees are not taken seriously either in Ukraine, or in Europe," Yanukovych said at a joint news conference with President Dmitry Medvedev in Moscow.

"A certain legal and political process is active now," he said. "And the decision will be made before Victory Day."

His statement comes after Russia's Federal Security Service (FSB) announced on Tuesday it would soon open an exhibition on the Soviet Union's fight against nationalist groups and Nazi collaborators during World War II.

The 65th anniversary of the Soviet Union's victory over Nazi Germany looks set to be a highly contentious affair after Moscow City Hall revealed plans on February 17 to set up billboards in commemoration of Stalin's role in World War II in the run-up to this year's Victory Day Parade on May 9.

The plans stirred controversy among Muscovites provoking anger from human rights activists and criticism from the ruling United Russia party, but won the sympathy of war veterans.