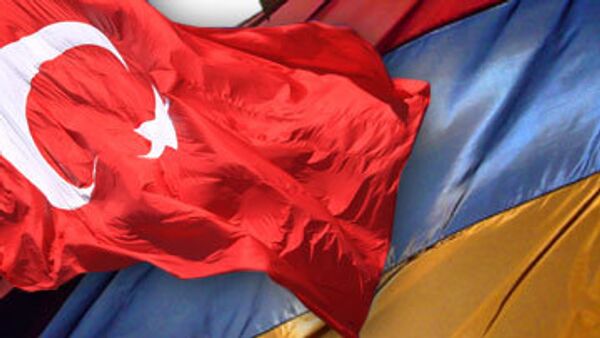 © Сollage by RIA Novosti
Subscribe
Azerbaijani MPs condemned on Friday the decision by the U.S. House Foreign Affairs Committee to approve a bill on the killing of Armenians by the Ottoman Empire during World War I.

Azerbaijani MPs condemned on Friday the decision by the U.S. House Foreign Affairs Committee to approve a bill on the killing of Armenians by the Ottoman Empire during World War I.

Yerevan describes the massacre of ethnic Armenians as "genocide" and says nearly 1.5 million people were killed. Turkey rejects the accusations.

Ali Ahmadov, deputy head of the ruling New Azerbaijan Party, told News.az the resolution was the "falsification of history," and added that the decision targeted not only Turkey, but also Azerbaijan.

Azerbaijan, populated mainly with Turks' ethnic kin, enjoys crucial support from Ankara in its stand-off with Armenia over Nagorno-Karabakh - a predominantly Armenian-populated region in Azerbaijan which broke away from Baku in the dying years of the Soviet Union.

Turkey, a key NATO ally and a crucial U.S. partner in operations in Iraq, is currently considering the suspension of military cooperation with Washington over the genocide ruling.

"The issue of the so-called 'Armenian genocide' is a lever of pressure on Turkey. This is a 'golden bullet' in the arsenal of the United States against Turkey," the New Azerbaijan party MP Mubariz Gurbanli told the Azerbaijani Trend news agency.

On March 4, the Foreign Affairs Committee of the U.S. House of Representatives voted 23-22 in support of the resolution following almost six hours of heated debates.

Azerbaijan, which has own rich oil reserves, is viewed in the West as a crucial link in an energy corridor which could deliver gas from Central Asia to Europe bypassing Russia.

The resolution has already become a diplomatic flashpoint between Washington and Ankara. Turkey earlier warned Washington that the move could jeopardize U.S-Turkish cooperation and set back talks aimed at opening the border between Turkey and Armenia closed since 1993 on Ankara's initiative.

Turkey and Armenia signed protocols on establishing diplomatic relations and on developing bilateral relations last October. They are yet to be approved by their parliaments.

A similar vote in the committee was approved by a wider margin in 2007, but the U.S. Bush administration, anxious to retain Turkish cooperation in Iraq, scuttled a full House vote.

A number of states have recognized the killings in Armenia as the first genocide of the 20th century, including Russia, France, Italy, Germany, the Netherlands, Belgium and Greece, as well as 42 of the 50 U.S. states. The Vatican, the European Parliament and the World Council of Churches have also denounced the killings as genocide. Uruguay was the first to do so in 1965.

However, on the eve of the vote, the Obama administration urged the committee not to approve the resolution, fearing it could alienate Washington's NATO ally, whose help the White House considers invaluable in solving confrontations in the Middle East and Afghanistan.