Russia to maintain but not build up nuclear deterrent - Medvedev 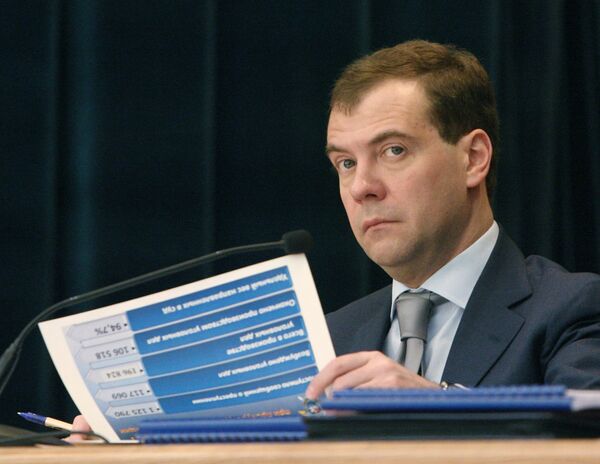 © POOL
/
Go to the photo bank
Subscribe
Russia is not planning to build up its strategic potential, but will keep its nuclear weapons, President Dmitry Medvedev said on Friday.

Russia is not planning to build up its strategic potential, but will keep its nuclear weapons, President Dmitry Medvedev said on Friday.

"Today we have no need to build up the potential of our strategic deterrence, but possession of nuclear weapons is a key condition for Russia to pursue its independent policies, for safeguarding its sovereignty, for peace efforts and for preventing any military conflict and also settling post-conflict situations," Medvedev said during a meeting at the Defense Ministry.

Russia and the United States have made considerable headway on a new strategic arms reductions pact in recent months, with talks set to continue on March 9. The new agreement is to replace the START Treaty that expired in December last year.

"It is important to take into account that there is a number of unsettled regional conflicts around our borders. It creates a potential threat to our country's national security," Medvedev said.

His statement comes amid concerns over Georgia's growing military potential, which Russia suspects receives heavy backing from the West.

"Unfortunately, the reestablishment of Georgia's military potential is continuing with the help of foreign military assistance," Medvedev said.

In February, Russia and Abkhazia signed a deal to set up a Russian military base in the former Georgian republic, to fierce protests from Tbilisi and the West.