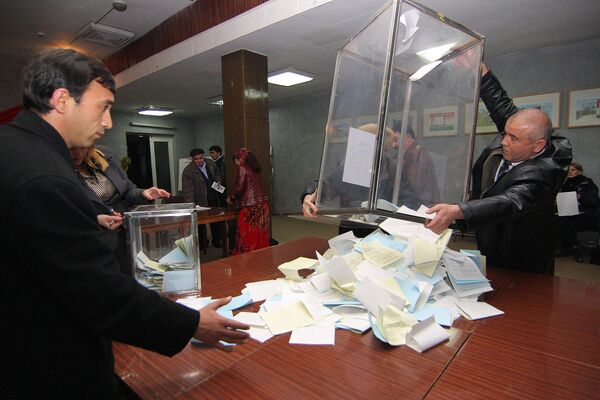 Tajik ruling People's Democratic Party led by President Emomali Rakhmon has received 54 of the 63 seats in the Parliament after elections on February 28, Tajik Central Election Commission said on Friday.

The People's Democratic Party has received 70.6% of the votes, according to the Central Election Commission.

Tajikistan's top election body declared the election in the ex-Soviet republic valid, with the country's electoral threshold being 50% plus one vote.

The Organization for Security and Cooperation in Europe said in a statement that parliamentary elections in Tajikistan failed to meet many international requirements, citing numerous irregularities during Sunday's elections, including "a high prevalence of family and proxy voting and cases of ballot box stuffing."

The polls were monitored by more than 25,000 local and about 540 international observers, representing the OSCE Parliamentary Assembly and the Office for Democratic Institutions and Human Rights (ODIHR), the Commonwealth of Independent States (CIS) and Shanghai Cooperation Organization (SCO).

The People's Democratic Party is the largest among the eight officially registered political parties in Tajikistan, numbering 85,000 members. Previously it held 52 of the 63 seats in the parliament.

Rakhmon, who has ruled the impoverished Central Asian nation of 7.5 million for almost two decades, was re-elected leader of the People's Democratic Party in December 2009.

Rakhmon's eldest son, Rustam Emomali, believed to be his father's possible successor, is running for a deputy seat in the Dushanbe city council.