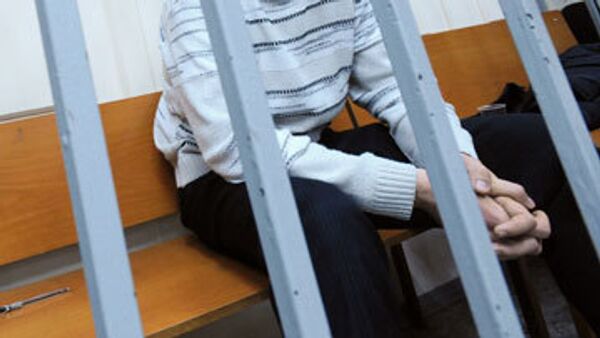 © RIA Novosti . Serguei Piatakov
Subscribe
A failed teacher who inspired a group of teenagers in east Siberia's Irkutsk to brutally murder at least five people, including burning one of them alive on a bonfire, was sentenced to 25 years in jail on Tuesday.

A failed teacher who inspired a group of teenagers in east Siberia's Irkutsk to brutally murder at least five people, including burning one of them alive on a bonfire, was sentenced to 25 years in jail on Tuesday.

The court heard that Konstantin Shumkov, 23, led the Blood Magic gang, consisting of 14- and 15-year-old boys from some of the city's poorest families, on a bloody rampage across the city from January to June 2008.

Police labeled the gang one of the most dangerous and brutal ever to have been uncovered in the region.

After drinking heavily and taking drugs, Shumkov and the teenagers set out to look for victims, beating them with metal poles and dropping rocks on them. They are known to have burnt at least one person to death. Most of the gang's victims were homeless people.

In May 2008, the group's acts reached their gruesome pinnacle when the body of a vagrant was cut up into dozens of pieces and dumped on the grounds of local schools. The man's head was left impaled on a fence.

When questioned, one of the teenagers said they initially wanted to leave the body parts on the territory of a city police station, but decided against it. He also said the group had left the head on the fence "for a laugh."

Shumkov had reportedly dreamed of becoming a primary school teacher before launching his reign of terror, but failed the entrance exam to a local teacher training college. He then became a DJ and worked in a bar.

He was unrepentant after his arrest, saying the murders were the result of his quest for "knowledge."

"I was interested in how a person dies. How it happens. It was something personal. Knowledge," Shumkov was quoted by regional media as saying last year.

"I did what I wanted to. I wasn't hung up on any morals," he said. When asked if he considered himself a psychopathic maniac, he replied in the affirmative.

A court psychological evaluation determined that Shumkov, who admitted cutting off the fingers of one victim, keeping them in his flat along with the eye of another, displayed "cruel and sadistic tendencies."

Investigators also claim that like many notorious murderers, the killer DJ began his life of violence by torturing and cutting up small animals.

Shumkov will serve the first ten years of his sentence in prison, after which he will be transferred to a prison camp.

The teenagers received between six to nine years in juvenile correctional facilities.