Ukraine's foreign policy: turn to the West, lie to the East 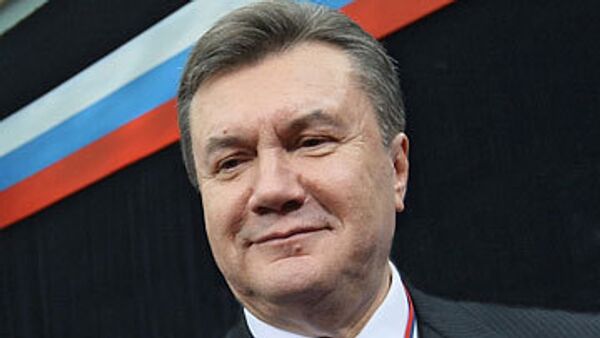 © RIA Novosti
Subscribe
The international media are eagerly commenting on a statement made by Viktor Yanukovych during his first visit to Brussels as Ukraine's new president. "Ukraine's relations with NATO will remain unchanged," Yanukovych said on March 1.

The international media are eagerly commenting on a statement made by Viktor Yanukovych during his first visit to Brussels as Ukraine's new president. "Ukraine's relations with NATO will remain unchanged," Yanukovych said on March 1.

The discussion is likely to be followed by forecasts of Ukraine's further progress toward NATO membership. Advocates of Ukraine's accession to the European Union are likely to resurge as well, as this prospect has allegedly become more probable since the European Parliament resolution adopted on the day Yanukovych was sworn in.

In fact, Ukraine's new president did not say anything new in Brussels. A drift toward NATO was announced as Ukraine's official strategy by President Leonid Kuchma. True, it was not approved by a national referendum, but by the parliament, which was as usual engaged in an on-going process of creating all sorts of coalitions. At that point, the "Donetsk" party decided to support the "Westerners." Later, after the "orange revolution," the Donetsk party based a whole political campaign on fighting the arrival of NATO warships in the Crimea. Consider the statement about the policy that is "to remain unchanged," when it looks more like a weather vane turning as political winds change.

Still, there are several facts that cannot be changed. For example, making Sevastopol NATO's Black Sea base is an absurd and dangerous idea, fraught with conflicts, misunderstandings and grudges. Neither would the Antonov aircraft design bureau, which was set up in the 1930s as a Moscow service centre for hang-gliders, fit into the alliance's structure. These are the facts that neither Leonid Kravchuk, nor Leonid Kuchma nor Viktor Yushchenko could change, and Yanukovych is unlikely to have more luck.

Ukraine's integration in the EU is a more complicated matter. All the previous Ukrainian governments viewed this integration as higher priority than integration with other post-Soviet states. Therefore, the post of a European integration minister was established in Ukraine, whereas it does not have a minister responsible for the development of a common economic space with Russia and other CIS countries (primarily Belarus and Kazakhstan).

The policy of Brussels coming ahead of Moscow was unfailingly pursued by each Ukrainian president regardless of the frequency and destinations of their foreign visits. This means Yanukovych's visit to Brussels scheduled before his visit to Moscow should not be given any symbolic meaning. When Yushchenko took office in 2005, he went to Moscow first, but it was during his presidency that Ukraine's pro-Western policy reached an absurd level.

Russia has paid a high price for taking Leonid Kuchma's rhetoric too seriously. The problem was greater than providing Ukraine with cheap energy resources from Siberia. A whole range of important initiatives within the CIS, including the establishment of the Economic Union, the Common Economic Space and others, were sabotaged by Ukrainian politicians who at first led Moscow to believe that Ukraine would join these alliances and then upset the integration schedules and plans citing either a recent parliamentary vote, or the sanctity of Ukraine's sovereignty, or other similar excuses.

As for Ukraine's actual accession to the EU, it is an issue of extremely remote future. Lidia Kosikova, an expert on Ukraine from the Russian Academy of Sciences' Institute of the Economy believes that even the Belarusian economy is better prepared to join the EU, albeit hypothetically. Objective Western analysts, who have no "orange" illusions, confirm her opinion.

Russia has never objected to Ukraine's integration into the EU. It was the EU, in fact, that sounded jealous when it demanded that Ukraine leave the EurAsEC if it wants to get integrated into Europe. Moreover, the European officials have never sealed their bans or promises with money.

European Commission President Jose Manuel Barroso has just offered Ukraine a �500 million loan for "being good." Considering that Ukraine's state budget, still not adopted, is likely to run a deficit of at least $10 billion, this loan seems modest indeed. The country's industry shrank by 21% over the year, and the government's social commitments made in the heat of the election race, are virtually impossible to meet.

Russia is the only country that can help Ukraine out. Therefore, we must be ready for more friendship talk from Yanukovych. In fact, he might do even better here than he did in Brussels speaking to Western politicians and journalists, who only recently referred to him as the Kremlin's puppet, an election thief, a twice-convicted violent felon and Ukraine's lumpen victor.