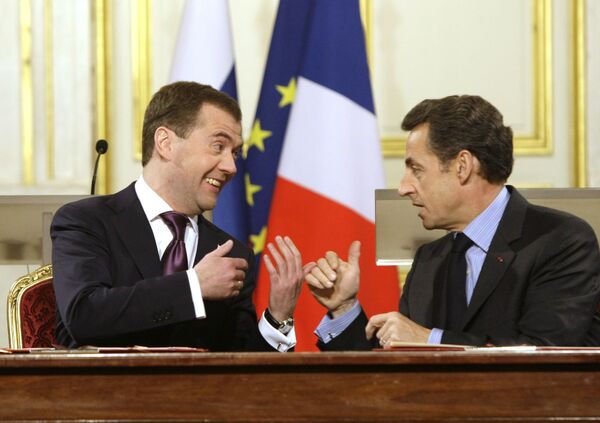 © RIA Novosti
/
Go to the photo bank
Subscribe
Vive la culture! But for a mutual craving for their respective national cultures, relations between Moscow and Paris could cool off more regularly than one might guess.

Vive la culture! But for a mutual craving for their respective national cultures, relations between Moscow and Paris could cool off more regularly than one might guess.

Russian President Dmitry Medvedev who arrived in Paris on his first state visit on March 1 also values the cultural side. At any rate, the opening of the Holy Rus exhibition at the Louvre is the most important event of his three-day visit.

Although political and economic relations between the Kremlin and the Elysee Palace sometimes turn down blind alleys, culture has always provided an opportunity to take them out into the open once again. Medvedev's visit is a case in point.

All state visits are better watched from the sidelines because the official process is predictable. In November 2009, Russian Prime Minister Vladimir Putin led a veritable Grand Trade Delegation to France, bringing with him the CEOs of virtually every national oil and gas, energy, steel, hi-tech, space, automotive, aircraft, banking, financial and any other company he could find. Consequently, the trade-energy, cultural and scientific aspects of Medvedev's visit are more or less clear.

Medvedev has to accomplish some no less important geopolitical objectives. Russia started to move ahead with smoother, stronger partnership with Germany under Federal Chancellor Angela Merkel. Relations with France under Nicolas Sarkozy should now attain a similar level.

Germany and France are the two major EU powers. The former plays the part of the EU's main economic driving force, while French President Nicolas Sarkozy also claims the right to oversee the formulation of the common EU foreign policy. Consequently, it would be appropriate to strengthen ties with both countries. Prior to Medvedev's visit, both Moscow and Paris said the relations of this privileged strategic partnership should be strengthened.

The visit will be remembered for the planned sale of a Mistral-class amphibious assault ship to Moscow, rather than for the Holy Rus exhibition and the official launching of the Years of Russia in France and France in Russia. Moscow wants to buy this ship and a production license allowing it to build three more such vessels at Russian shipyards. France is ready to go ahead with the deal, the first such major contract between a NATO country and Russia.

Mistral-class ships have become a highly important factor in Russian-French relations, relations between France and NATO and those involving NATO, the EU, France, Poland, the three Baltic states plus Georgia. In fact, the removal of this factor is fraught with extremely painful consequences. Poland, Lithuania, Latvia, Estonia and Georgia actively oppose the sale of these ships to Russia, citing the potentially aggressive uses for them in the Baltic and Black Seas.

Nor does Washington want Paris to go ahead with the Mistral deal. France is prepared to sell the ships minus their hi-tech components, so as not to irritate NATO, EU and U.S. partners.

The military aspects of the sale of Mistral-class ships to Russia are being exaggerated but in fact they are not really the most important part of the deal. These ships exert economic pressure on the administration of President Nicolas Sarkozy. If the deal goes through, it will provide jobs for thousands of workers in the shipyards at Saint-Nazaire, France. Without it, there will be no jobs. This factor cannot be overlooked during economic recession.

Spain and The Netherlands are closely following the deal. They have similar amphibious assault ships, though a bit smaller in size, which they can willingly offer to Russia instead of the French ones.

Any Russian-organized amphibious landing involving Mistral-class ships in the Baltic or the Black Sea is far-fetched, to say the least. It is Moscow that should maintain a permanent military readiness, now that NATO moved much closer to the western Russian border.

The United States, Japan and China would be worried if the Mistral deal really had any serious military implications. But Washington, Tokyo and Beijing remain unconcerned. For example, U.S. Secretary of Defense Robert Gates recently visited France and held discussions with his French counterpart Herve Morin and President Nicolas Sarkozy. After discussing the Mistral contract, Gates said "the issue is a message issue more than a military issue."

The French have always loved all things Russian - from ballet to pirogi (pies) and soldiers. The Napoleonic Wars are about the only exception. On the other hand, and for obvious reasons, the Kremlin has never been loved by Paris. Paraphrasing Vladimir Putin who said: "Let's have flies and cutlets separately," France has always treated Russians and the Kremlin separately. Prior to the visit, Paris-based newspapers discussed the role of individuals in the history of Russian-French relations.

These days, French newspapers want to find out whether it is possible to maintain friendly relations with Russia by selling Mistral-class ships to it, and who of the Russian leaders should France make friends with - Medvedev or Putin.

The media says friendship is essential if France advocates genuine partnership, if it does not play the hypocrite, and if it does not still view Russia as the former Soviet Union. According to the papers, Russia should be involved in building European security and not induced to revive its imperial ambitions for the sake of avoiding conflicts similar to the Caucasian conflict, etc.

As far as the second issue is concerned, French Foreign Minister Bernard Kouchner told Le Monde before Medvedev's visit that the Medvedev generation differed completely from the Putin generation, and that it was easier to deal with Medvedev who was more open to Western ideas, more liberal and was "a modern Gorbachev", to quote a French analyst. Mikhail Gorbachev would be glad to hear this.

It appears that Medvedev, rather than Putin, deserves to receive Mistral-class ships. However, the ships will be sold to both leaders. Thanks to the mutual craving for culture.