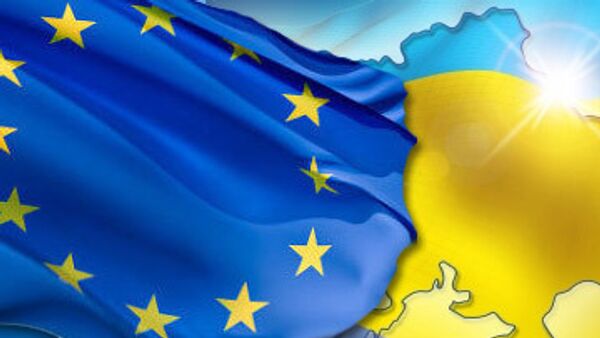 © Сollage by RIA Novosti
Subscribe
A slim majority of Ukrainians favor joining the European Union but almost two thirds oppose NATO membership, according to an opinion poll published on Tuesday.

A slim majority of Ukrainians favor joining the European Union but almost two thirds oppose NATO membership, according to an opinion poll published on Tuesday.

The poll, carried out by Democratic Initiative foundation and Ukrainian Sociology Service pollster in December 2009, showed that if a referendum on accession to the European Union, 51 percent of the Ukrainian electorate would vote to join, while only 27 percent would object.

The inhabitants of western Ukraine were mostly for EU membership, while half of the population in eastern Donbas region and the Crimean Peninsula were opposed to the idea.

According to the poll, only 61 percent of respondents said they would have taken part in such a referendum, down from 78 percent in 2008.

“Ukrainians have dramatically lost interest in politics because of the volatile political environment in the country,” Irina Bekeshkina, the head of Democratic Initiative foundation, said at a news conference on Tuesday.

Sixty percent said they would have participated in a referendum on Ukraine accession to NATO, with a majority of 60 percent opposing membership. Twenty-one percent backed joining the Western military alliance, while 19 percent gave no opinion.

Bekeshkina said there were three main reasons why Ukrainians are against joining NATO. First, they see it as an aggressive political bloc, second, it could involve Ukraine in military operations, and third, joining NATO could spoil relations with Russia.

The opinion poll showed that 58 percent would favor Ukraine joining the Customs Union with Russia, Belarus and Kazakhstan. The poll was held on December 12-26 among 2,010 respondents with a 2.3% margin of error.