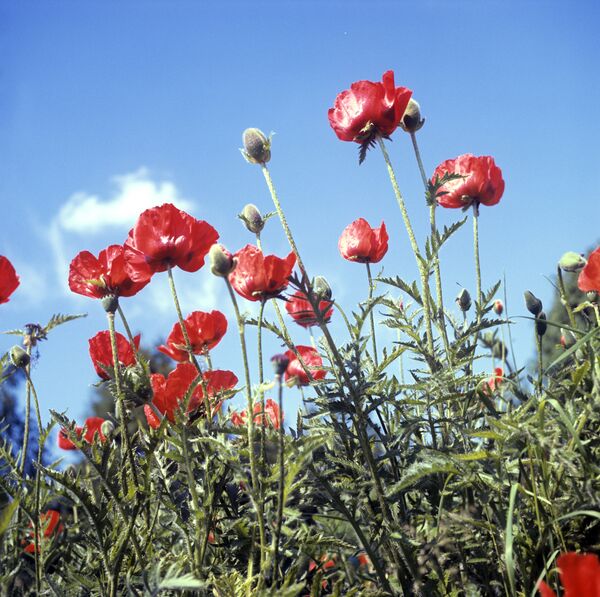 © RIA Novosti . Tikhonov
/
Go to the photo bank
Subscribe
The United States has completed a military operation in Afghanistan's Hilmand Province and is preparing a new operation, in Kandahar. The U.S. says its new strategy in Afghanistan does not emphasize action against drug producers.

The United States has completed a military operation in Afghanistan's Hilmand Province and is preparing a new operation, in Kandahar. The U.S. says its new strategy in Afghanistan does not emphasize action against drug producers.

The U.S. most likely does not want to provoke the wrath of the Afghans, whose welfare largely depends on opium poppy plantations.

According to a recent report published by the UN Office on Drugs and Crime (UNODC), although the area sown with opium poppy in Afghanistan has decreased from 193,000 in 2007 to 123,000 hectares in 2009, the production of drugs there has grown considerably since 2001 and now amounts to 7,500 metric tons of opium.

Heroin production is a major threat. Secret laboratories in the provinces of Badakhshan, Hilmand and Nangarhar annually produce more than 800 metric tons of heroin.

However, it is Russia that leads in the number of heroin-related deaths. The UNODC report says addicts in the Russian Federation now consume a staggering 75-80 tons of Afghan heroin a year, or 20% of Afghan heroin production.

This UN data is confirmed by Russian sources. In March 2009, Viktor Ivanov, head of the Federal Service for Drug Control, said that there were between 2 million and 2.5 million drug addicts in Russia, out of which 500,000 were officially registered. Increasing numbers of Russians are dying from drug abuse, 30,000-40,000, according to government estimates, and the number of drug addicts grows by 80,000 every year.

There are three main drug routes from Afghanistan, the largest of them running via Iran (35%-40% of drugs).

The second route runs via Tajikistan, Turkmenistan and Uzbekistan (25%-30%), with some 50 tons of heroin reaching Russia annually, mostly through Kazakhstan. There is also an air route to Russia from Pakistan and Central Asia and sea and air routes from Africa.

The third route runs via Pakistan (25%-30% of drugs), in particular via Baluchistan to Karachi and on to Western Europe by sea.

Tajikistan, where law-enforcement corruption runs rampant, is the main transit country of the northern route. When Russia pulled its border troops from Tajikistan in 2005, the number of illicit drug seizures on the border with Afghanistan plummeted.

Kyrgyzstan has recently doubled its anti-drug trafficking efforts. The Kyrgyz president's commission for drug control is closely cooperating with its counterparts in Iran, which is logical because the growing inflow of drugs is destabilizing the situation in the Fergana Valley.

The government of Uzbekistan is focusing on the problem of drug trafficking across the country, especially after the May 2005 tragedy in Andijan, and because several international terrorist organizations are involved.

So far it is difficult to develop cooperation in combating drug trafficking with Turkmenistan. Although not widely used as a transit route for large batches of Afghan heroin and opium, Turkmenistan is a kind of grey zone inadequately controlled by the international community.

The Afghan government started fighting drugs as soon as it replaced the Taliban regime. The temporary government led by Hamid Karzai banned the cultivation of opium poppy, set up a drug enforcement agency and started plowing under poppy plantations.

It was believed then that the production of drugs in Afghanistan would plunge 75% by 2008, but none of the above measures bore this out.

Afghan drug traffic poses a formidable threat to the security of Russia and the Central Asian countries, as the drug flow has grown to an alarming proportion.

The U.S. and NATO troops deployed in Afghanistan refuse to address the problem.

This means that the international community must join forces against this global evil, preferably within the framework of the Collective Security Treaty Organization, which comprises Armenia, Belarus, Kazakhstan, Kyrgyzstan, Russia, Uzbekistan and Tajikistan. Iran, India, Mongolia and Pakistan have observer status.

Vladimir Yevseyev is a learned secretary of the Russian Academy of Sciences' Coordinating Council for Prognostication.