Russia to help jobless create own businesses in 2010 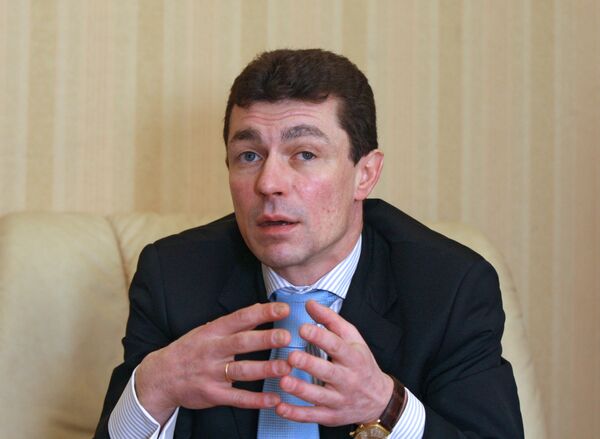 © RIA Novosti . Alexey Kudenko
/
Go to the photo bank
Subscribe
The Russian government will continue helping the jobless create their own businesses in 2010 and intends on maintaining the practice even after the economic crisis is over, a senior government official said on Tuesday.

The Russian government will continue helping the jobless create their own businesses in 2010 and intends on maintaining the practice even after the economic crisis is over, a senior government official said on Tuesday.

Deputy Minister of Health and Social Development Maxim Topilin said last year each unemployed individual who had applied for a subsidy to launch his own small business received 58,000 rubles ($1,933) in a lump sum.

"The well-proven system of self-employment is likely to become a part of a standard unemployment package," Topilin said in an interview with Rossiiskaya Gazeta daily.

He added that in 2010, those who had become the owner of a small business would receive an extra 58,000 rubles for each unemployed individual hired.

"Soon we will make the necessary amendments in the tax code and coordinate it with the finance ministry. Anyway, we will support the entrepreneurs even after the crisis."

Despite anti-crisis programs, the number of unemployment in Russia is still growing. From the beginning of 2010, 174,000 people have lost their jobs. According to research carried out by the ministry of public health services and social development, the level of unemployment has grown by 1% over the last week to 2.3 million.

Topilin said the program of subsidizing startups for the unemployed has worked unexpectedly well. Initially the government expected 60,000 people to grasp this opportunity and launch their own business in 2009, but the actual number was over twice that amount at 127,800.

Among the most popular business are hairdresser and manicure salons, car repairs, medical offices, tailor shops and farms.

In 2010, the government hopes to employ over 170,000 jobless through the startup program.