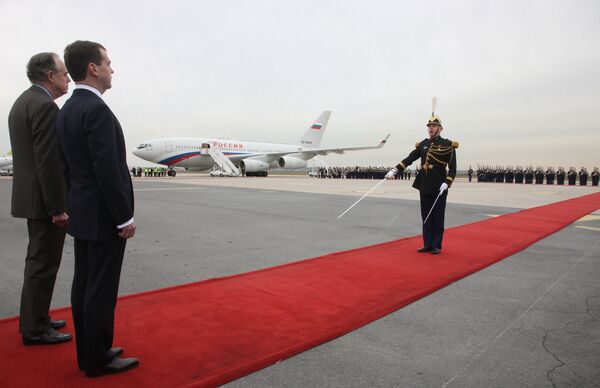 © POOL
/
Go to the photo bank
Subscribe
President Dmitry Medvedev said on Monday that Russia and the United States are close to completing negotiations on a new treaty on strategic arms cuts, and expressed the hope that the document could be signed soon.

President Dmitry Medvedev said on Monday that Russia and the United States are close to completing negotiations on a new treaty on strategic arms cuts, and expressed the hope that the document could be signed soon.

"In my opinion, the situation is not bad. We are close to reaching agreement on nearly all the issues," Medvedev said at a joint news conference following talks with French President Nicolas Sarkozy.

"Now we have moved forward to the final part of the negotiations, we are coordinating the nuances of the text. I hope the negotiations will be completed very soon," he said, adding that the deal could set an example at the international nonproliferation summit to be held in the United States in April.

Russia's Foreign Ministry said earlier on Monday that progress had been made in the latest round of talks in Geneva in February, and that a new round would begin on March 9.

The ministry said the sides had "considerably moved forward in coordinating the remaining issues on a set of documents that will form the package of the new agreement."

"The sides agreed to continue official talks from March 9 in Geneva," the ministry said.

Russia and the United States have been negotiating a replacement to the Strategic Arms Reduction Treaty since the two countries' presidents met in April last year, but finalizing a document has dragged on, with U.S. plans for missile defense in Europe a particular sticking point. START 1, the cornerstone of post-Cold War arms control, expired on December 5.

Senior Russian lawmaker Konstantin Kosachyov said last Wednesday that parliament was unlikely to ratify any treaty that did not include a link to Washington's plans to deploy missile shield elements in Europe.

He admitted, however, that the Russian demand would probably not be included in the new pact as the U.S. Senate would not approve any document containing a formal linkage between the arms cuts and the missile shield.

Obama scrapped plans last year for interceptor missiles in Poland and a radar in the Czech Republic pursued by his predecessor as protection against possible Iranian strikes in an apparent move to ease Russian security concerns.

In February, however, Romania and Bulgaria said they were in talks with the Obama administration on deploying elements of the U.S. missile shield on their territories from 2015, triggering an angry reaction from Moscow.