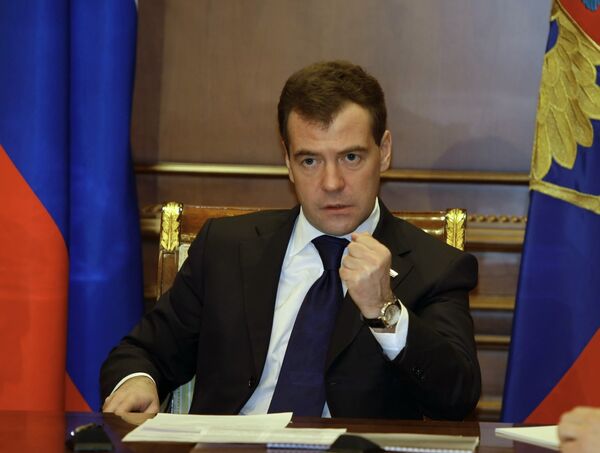 © RIA Novosti
/
Go to the photo bank
Subscribe
The officials responsible for the preparation of Russia's Winter Olympic team must submit their resignations, the Russian president said on Monday.

The officials responsible for the preparation of Russia's Winter Olympic team must submit their resignations, the Russian president said on Monday.

"Those who bear responsibility for the Olympic preparations should take responsibility immediately. Those responsible should take a courageous decision and submit their resignations," Dmitry Medvedev said at a meeting with the leadership of the ruling United Russia party.

He called for a drastic change in the system of athlete training, saying "colossal money was being invested" in the development of sports, but as Vancouver had shown, "money cannot do everything."

"We should think about changing the athlete training system. The athlete, not federations, those fat cats, must be given priority," Medvedev said.

The Kremlin has been appalled by Russia's "dismal" performance at the Vancouver Olympics.

Medvedev aide Sergei Prikhodko said he bet a bottle of cognac before the Olympics that the Russian hockey squad would not even make it into the top three.

"I was about to be beaten up for saying this. It's too bad the bet was so low. I bet a bottle of cognac with everyone who was in the group [with me]," he said.

Prime Minister Vladimir Putin has said that Russia's disappointing performance at the Vancouver Olympics must be thoroughly analyzed before the Sochi 2014 Games, indicating that heads could roll.

In 1952, after the Soviet Union's football side lost to Yugoslavia in the final of the Helsinki Summer Games, an enraged Stalin disbanded the CSKA Moscow side, from which most of the players were drawn. The defeat was not mentioned in the Soviet press until after the dictator's death a year later, when CSKA also reformed.