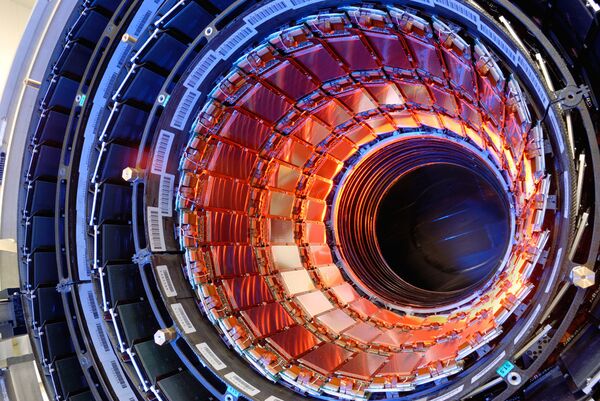 © CERN
Subscribe
The world's most powerful atom smasher has been restarted, the Symmetry magazine reported Sunday.

The world's most powerful atom smasher has been restarted, the Symmetry magazine reported Sunday.

The first protons were injected into the Large Hadron Collider (LHC) on Saturday following a pre-New Year technical shutdown and traveled in both directions successfully.

"The circulating beams marked the end of a ten week particle-free hiatus for the world's largest particle accelerator, during which LHC scientists and engineers have prepared the machine for its biggest challenge yet, particle collisions at an energy of seven trillion electron volts (TeV). The beams also mark the beginning of the LHC's first long run, expected to last until at least mid-year 2011," Symmetry said.

In 2011, the collider will be shut down again to prepare it for its design collision energy of 14 TeV.

The $4.9-billion international LHC project has involved more than 2,000 physicists from hundreds of universities and laboratories in 34 countries since 1984. Over 700 Russian physicists from 12 research institutes have taken part.

Work to repair and upgrade the collider after the breakdown cost almost $40 mln and took over a year. A system to protect it from such accidents, named the Quench Protection System, was installed, and the first beams were injected into the LHC on November 20.