Plushenko leaves it up to officials to challenge Olympic judges 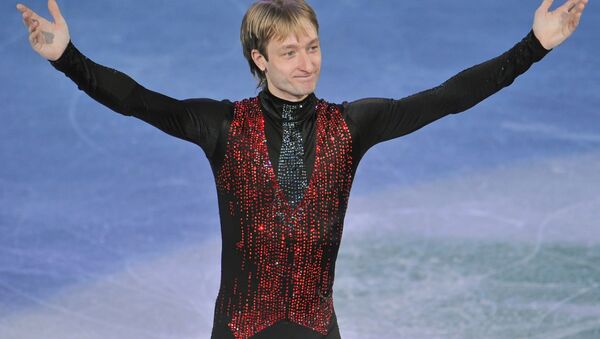 © Sputnik / Vladimir Baranov
/
Go to the photo bank
Subscribe
Russian figure skater Evgeni Plushenko, disappointed with his silver medal at the Vancouver Winter Olympics, said on Friday that officials, not athletes, should challenge the judges.

Russian figure skater Evgeni Plushenko, disappointed with his silver medal at the Vancouver Winter Olympics, said on Friday that officials, not athletes, should challenge the judges.

The 2006 Olympic champion, who led Evan Lysacek of the United States by half a point after the short program, was beaten out by the American in the final free skate. Lysacek won with an overall score of 257.67, while Plushenko, who opted for a more difficult routine, received 256.36.

The Russian figure skater expressed his displeasure over the judges' scoring.

"When a person performs a quadruple jump, which is contested by a triple, and [both contenders] gain the same points, it raises questions," he said.

Plushenko said, however, that he would not file a claim against the judges.

"It depends on the authorities," he said. "Not the sportsmen, but the [Figure Skating] Federation, the officials, the people who are responsible for the sport."

The Russian skater said the sports authorities should have "raised a hue and cry" following the short program, when the judges gave him just 0.35 points more than his rival, whose routine was less complicated.

"How can he be the Olympic champion?" Plushenko asked. "Now, even women make three-and-half-turn jumps. Quadruple jumps are the future of the figure skating," he said, adding the current judging system has taken the sport "back to the past."

Plushenko skated freely, with his usual charisma, drawing laughs from spectators with his seductive tango. He began his dance to Tango Amore by Edwin Marton with quadruple and triple jumps, but omitted a double Rittberger. He also made an imperfect landing after a triple axel. But his footwork and spins cost him the most points.

Plushenko said after the result that he might quit the sport. "This may be my last competition. We will see," the 27-year-old said.

The former Olympic and three-time world champion returned to the ice late last year after a self-imposed retirement from competitive skating following his stunning performance in Torino.