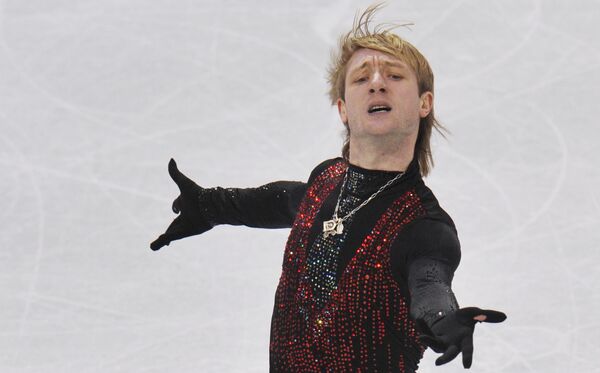 Russia's Evgeni Plushenko, who hoped to become the first repeat men's Olympic gold medalist since 1952, but won silver in the free skate in Vancouver, said on Friday he might quit sports.

Russia's Evgeni Plushenko, who hoped to become the first repeat men's Olympic gold medalist since 1952, but won silver in the free skate in Vancouver, said on Friday he might quit sports.

Plushenko led the competition after the short program, but the U.S.'s Evan Lysacek, the reigning world champion, beat him with an overall score of 257.67 points. Japan's Daisuke Takahashi will take home the bronze medal with 247.23. Plushenko's overall score from both events was 256.36.

Plushenko, 27, said figure skating has changed and he may quit the sport. "This may be my last competition. We will see," he said.

"It is hard to say anything as I was sure I had won my second Olympics. With the old [judging] system... A quadruple jump is a quadruple jump," he said.

"I'm not ready to skate well and then lose. The [judging] system needs to be changed. This is men's figure skating and not pairs. I am not ready to lose with a quadruple jump."

"It's clear why the judging system was changed because the United States and Canada don't have anyone who can do a quadruple jump," Plushenko said.

But Plushenko said he was happy to return to the ice and skate in Vancouver.

"I did the right thing. I am immensely grateful to God, my coach, parents and wife who supported me throughout the season allowing me to win all those competitions after more than three years of retirement."

Plushenko skated freely, with his usual charisma, drawing laughs from spectators with his seductive tango. He held up his index finger when he finished showing he was sure of his victory.

The 2006 Olympic champion began his number to Tango Amore by Edwin Marton with a quadruple and triple jumps, but ommitted a double Rittberger. He also made an imperfect landing after a triple axel. But his footwork and spins cost him the most points.

"It is nonsense when a skater wins in the Olympics without a quad jump. The judging system takes figure skating back to the past," Mishin told reporters after the competition.

He sounded upbeat about Plushenko's future in the sport: "We will continue skating. I am proud of my student."

The 2006 Olympic winner and three-time world champion Plushenko returned to the ice late last year after a self-imposed retirement following his stunning performance in Torino.