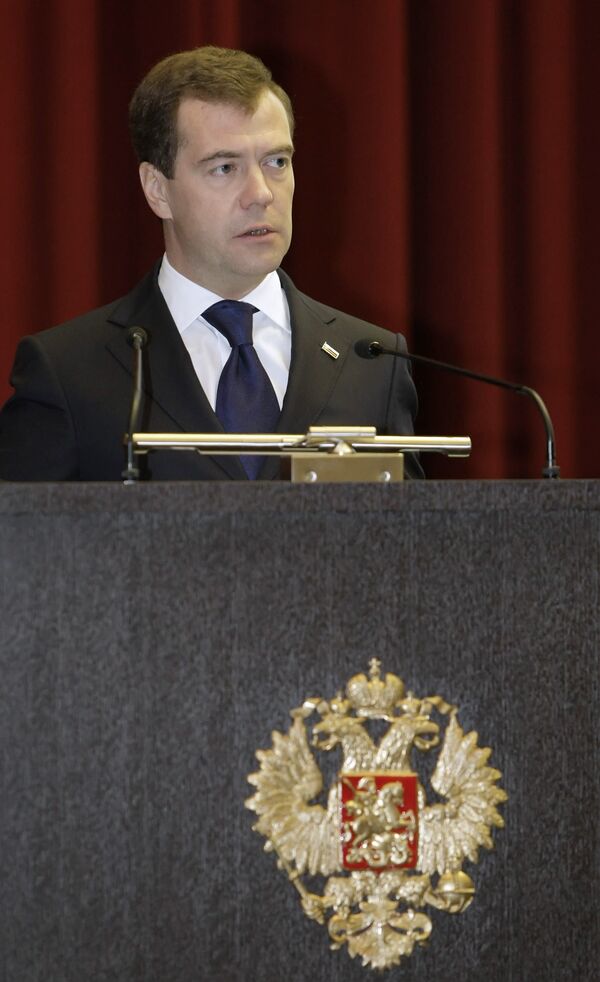 © RIA Novosti
/
Go to the photo bank
Subscribe
About half of the 17 top Russian police officials discharged on Thursday were dismissed over violations committed by subordinates while others were removed to bring in new blood, a Kremlin source said.

About half of the 17 top Russian police officials discharged on Thursday were dismissed over violations committed by subordinates while others were removed to bring in new blood, a Kremlin source said.

President Dmitry Medvedev ordered the discharge of 17 top police generals earlier on Thursday as part of ongoing efforts to reform the police force.

"The president's decisions with regard to top Interior Ministry officials were linked to violations committed in the work of law enforcement agencies," the source said.

"Half of them were discharged as part of personnel rotation," he added, using a Kremlin euphemism to suggest the officials had been in their posts for too long.

A member of the Russian Public Chamber, an advisory body to the president, said Medvedev's move was meant to serve as a warning to others.

"If more crimes are committed [by police], officials will be held responsible, and new dismissals will follow," Anatoly Kucherena said, adding that this was the only way to salvage the force's credibility.

Those relieved of duty included two deputy interior ministers, Col. Gen. Nikolai Ovchinnikov and Col. Gen. Arkady Yedelev, who were replaced by Sergei Bulavin and Sergei Gerasimov. Although Russia's Defense Ministry has long been under civilian leadership, serving police continue to run the Interior Ministry and both Bulavin and Gerasimov are senior officers.

Most of the dismissed generals were chiefs of regional police administrations and some heads of federal Interior Ministry directorates.

Also on Thursday, Medvedev moved to introduce tougher punishment for police found guilty of crimes, submitting a bill to the parliament imposing harsher sentences than for civilians convicted of similar offences.

The president signed an order to halve the federal Interior Ministry's senior administration to 10,000 people as part of the reform drive, and urged new anti-corruption measures and tighter selection procedures for police personnel.

Medvedev ordered in December that the number of police personnel be reduced by 20% over the next two years, proposing the cuts be balanced by higher salaries for remaining staff in a bid to improve the police force and address public anger over corruption and other abuses.

The moves were prompted by a series of scandals last year, including a supermarket shooting on April 29, 2009, by a former head of a Moscow police station, Maj. Denis Yevsyukov, and a video message from Novorossiisk officer Alexei Dymovsky to Prime Minister Vladimir Putin alleging corruption in the city's police force.

Dymovsky was fired over the claims, and has been charged with fraud and abuse of office, but one of the regional officers relieved of duty on Thursday was Maj. Gen. Boris Martynov, deputy head of Krasnodar Territory's Main Internal Affairs Department to which the Novorossiisk city police answers.