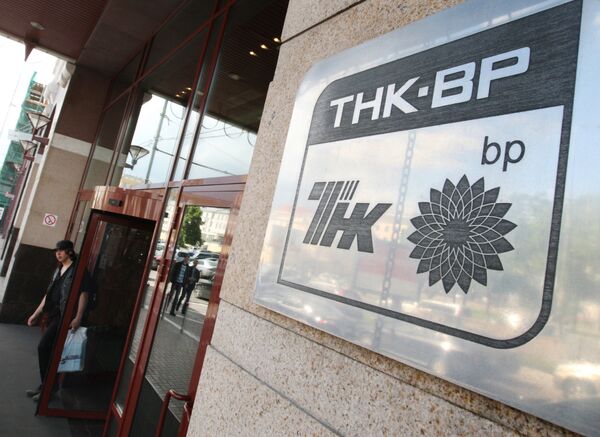 © RIA Novosti . Ilya Pitalev
/
Go to the mediabank
Subscribe
International
India
Africa
Russia's environmental regulator said on Wednesday that the Russian-British joint oil venture TNK-BP may lose its license to develop a huge gas field in Siberia over a failure to comply with the terms of the agreement.

Russia's environmental regulator said on Wednesday that the Russian-British joint oil venture TNK-BP may lose its license to develop a huge gas field in Siberia over a failure to comply with the terms of the agreement.

Rosprirodnadzor has completed an unscheduled audit of TNK-BP's operations at the Kovykta gas condensate field, with estimated reserves of over 2 trillion cubic meters of natural gas, and will recommend that the Natural Resources Ministry revoke the license, the watchdog said.

It was earlier reported that a decision on the revoking of the license for the gas field, which also contains 2.3 billion cubic meters of helium and 115 million metric tons of gas condensate, could be made before March 1, 2010.

The gas field is located in East Siberia's Irkutsk Region.

Under the terms of the license agreement, TNK-BP, a highly lucrative 50-50 joint venture between the British major BP and four Russian billionaires, is required to produce 9 billion cubic meters of gas annually in contrast to its actual output of several dozen million cubic meters.

Russia's Natural Resources Ministry carried out a check of the joint venture's compliance with the license agreement in 2007 and gave RUSIA Petroleum, the Kovykta operator owned by TNK-BP, twelve months to bring up output to the level stipulated in the agreement.

Natural Resources Minister Yury Trutnev earlier announced, however, that "the license agreements were not fulfilled in the past and are not being fulfilled at present."

Last week, Viktor Vekselberg, one of the four Russian partners in the joint venture with BP, said there were difficulties with the implementation of the Kovykta project, adding that an unscheduled check by the regulator was damaging the investment environment in the country and would not contribute to efforts to resolve the problem.

The regulator's plans to revoke the license may be linked to an unsettled deal between energy giant Gazprom and TNK-BP on the gas field.

Under an agreement signed in 2007, Gazprom intended to buy a 62.8% stake in RUSIA Petroleum to take over the Kovykta gas field. The deal, however, has not been closed as Gazprom was reported in December 2008 to have asked TNK-BP to reduce the price for the purchase of the Kovykta field, originally estimated at $700-900 million.