Abkhazia signs deal with Kremlin on Russian base on its soil 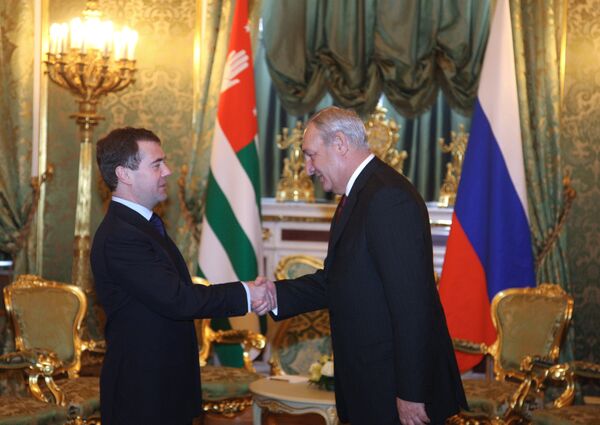 © POOL
/
Go to the photo bank
Subscribe
The presidents of Abkhazia and Russia signed a deal on Wednesday allowing a Russian military base in the former Georgian republic for 50 years, despite fierce criticism from Tbilisi and Western nations.

The presidents of Abkhazia and Russia signed a deal on Wednesday allowing a Russian military base in the former Georgian republic for 50 years, despite fierce criticism from Tbilisi and Western nations.

The deal was signed during Kremlin talks between President Dmitry Medvedev and his Abkhazian counterpart, Sergei Bagapsh, who arrived in Moscow on Tuesday on the first visit since his reelection as president of the tiny region on the Black Sea.

According to the agreement, the base will "protect Abkhazia's sovereignty and security, including against international terrorist groups."

Russia has maintained a 1,700-strong force in Abkhazia with its headquarters in Gudauta, a former Soviet military base on the Black Sea coast north of the capital, Sukhumi, under a September 2009 agreement on military cooperation.

Moscow recognized the republic's independence in August 2008 after a five-day war to repel an assault by U.S. ally Georgia on another breakaway region, South Ossetia.

Previous reports said the new deal would allow Russia to build new infrastructure and double troop numbers in the event of a security threat.

Georgia has fiercely criticized the plans for the base in Abkhazia, which it considers part of its territory.

Russia's military buildup in the region since the armed conflict has also been condemned by the West as running counter to international law and contravening the internationally brokered ceasefire agreement signed by Russia and Georgia in the wake of their August 2008 conflict.

Speaking at a news conference after the talks, Medvedev said the base deal and a host of other agreements signed in the Kremlin were in line with Russia's international commitments.

"These documents are in full compliance with our vision of cooperation with Abkhazia and with our international obligations," Medvedev said.

"The main thing is that the agreements form a basis for Abkhazia's peaceful development as an independent state," he said.

Medvedev repeated he was not going to deal with Georgian President Mikheil Saakashvili, who he blamed for starting the war in 2008.

"We will restore normal relations with Georgia sooner or later. This is inevitable, but I personally will not deal with the current Georgian president. He is persona non grata to Russia," Medvedev said.

Bagapsh, who also discussed economic aid at talks with Medvedev, thanked Russia for support and pledged commitment to cooperation with Moscow.

"We realize that what you did in 2008 was a daring and wise move," said the Abkhazian president, who was inaugurated for a second term last week after his reelection on December 12.