Transdnestr could host Russian military base, but Russia is unwilling 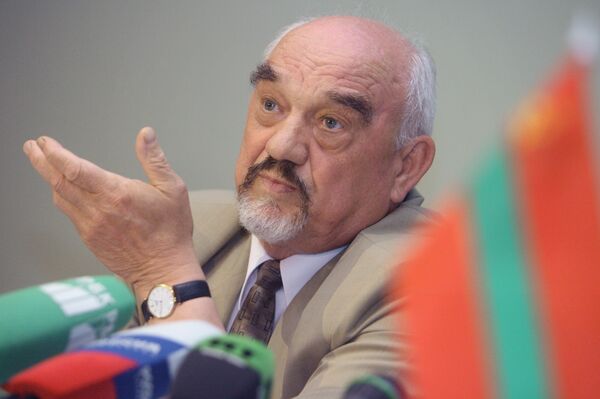 © RIA Novosti . Alexei Nikolsky
/
Go to the photo bank
Subscribe
Transdnestr leader Igor Smirnov said in Moscow on Monday that the breakaway republic in Moldova was not opposed to Russia deploying its Iskander tactical missiles in the republic.

Transdnestr leader Igor Smirnov said in Moscow on Monday that the breakaway republic in Moldova was not opposed to Russia deploying its Iskander tactical missiles in the republic.

"We said long ago that we are ready [for this]; we have asked Russia to keep its military presence indefinitely. We would not protest the deployment of Russian forces with any weapons for the protection of the Transdnestr, Russian and Ukrainian people," Smirnov said when answering journalists' questions about Transdnestr's readiness to host Russian ballistic missile defense systems.

What could be the objective of a Russian base in the republic, should it be deployed there?

The desire of Transdnestr to host a Russian military base is understandable, as Russia's influence reinforced with a group of forces is one of the main guarantees of the republic's potential sovereignty and independence. A stronger Russian military presence would be an additional factor.

Currently, Russia has approximately 1,500 troops armed with light weapons and hardware in Transdnestr protecting the weapons warehouses of the former 14th General Purpose Army of the former Soviet Union.

Russia has no need for such systems there because it has no potential enemies armed with medium-range ballistic missiles in the south-western direction. It would be more logical to deploy weapons there that would be able to neutralize the U.S. ballistic missile defense systems.

However, if Russia takes such a decision, it will most likely deploy the missiles in the Kaliningrad Region, which borders on Poland, because a ballistic missile defense base in Poland, if equipped with more powerful missiles than the SM-3 currently planned for deployment there, would be able to intercept Russian ICBMs.

In this case, the neutralization of a potential U.S. base in Romania would be a secondary objective. The base in Romania could be used to intercept Russian missiles only if they are launched at targets in south Europe and North Africa, which is highly unlikely.

Therefore, the main concern over the planned deployment of U.S. ballistic missile defense systems in Romania could be the growing influence of the United States in Eastern Europe. Responding to these plans by deploying a similar base in Transdnestr would only aggravate the problem and complicate relations between Russia and Moldova and further dialogue on the future of Transdnestr.

Russia's small military presence in Transdnestr given the current political situation in Ukraine, which is bound to change with the transfer of power from Viktor Yushchenko to Viktor Yanukovych, is sufficient for facilitating dialogue on Transdnestr.

Any unduly sharp move in this situation would only complicate relations, and could be possible only in case of a new aggression against Transdnestr. In this event it would be logical if Russia rendered assistance to the breakaway republic, and subsequently extended diplomatic recognition to it and deployed a larger military group there, just as it did in 2008 in Abkhazia and South Ossetia following Georgia's aggression.

So far, strengthening Russia's military presence in Transdnestr appears unnecessary since Russia is conducting dialogue with Moldova, which is not determined to use military force to resolve the problem of the breakaway republic.