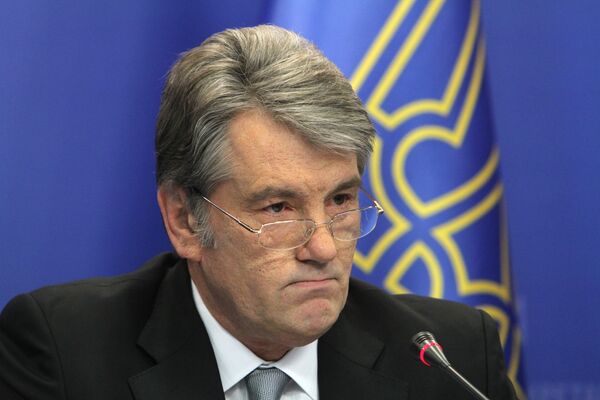 © RIA Novosti . Grigoriy Vasilenko
/
Go to the photo bank
Subscribe
Outgoing Ukrainian President Viktor Yushchenko said on Tuesday he was leaving office happy after serving his country's independence, but was ready to return as premier in a new government.

Outgoing Ukrainian President Viktor Yushchenko said on Tuesday he was leaving office happy after serving his country's independence, but was ready to return as premier in a new government.

"I was a little soldier who fought for his grandfathers' dream to come true, for an independent, sovereign Ukraine, following its own course," Yushchenko said at a news conference.

Yushchenko is handing over power to opposition leader Viktor Yanukovych, whose tainted victory he overturned in a re-held vote after the 2004 "orange revolution" protests. The president's departure from office was confirmed in the first round of voting on January 17, when he came fifth with just over 5%.

Yushchenko said he was willing to stay in politics, perhaps as prime minister or central bank chief. "I am open to these proposals," he said.

Yanukovych, who is set to be inaugurated in a ceremony in parliament on February 25, has ruled out appointing Yushchenko prime minister, calling him a political enemy.

The Party of Regions leader has mentioned former central banker Sergei Tigipko, who came third in the first round, as a possible prime minister. His campaign chief Mykola Azarov has also been talked of as a potential candidate.

Yushchenko acknowledged Ukraine would pursue different foreign policies under the new president, but said he wanted a symbolic meeting with Yanukovych after he was sworn in, to hand over power and "to exchange ideas about things that are dear to me."

Yanukovych has vowed to restore ties with Russia that strained as Yushchenko had sought to bring the ex-Soviet state into NATO and the European Union.

He has pledged to make Russian an official language in Ukraine, to consider extending the Russian navy base's stay in the country, and to set up a natural gas consortium to deter fresh disputes affecting transits to Europe.

"Obviously, this is a change of direction," Yushchenko told reporters. "I am not going to lecture him. The responsibility is already his."

But he called the Russian Black Sea Fleet's stay in Ukraine a "destabilizing factor" and a "colonial policy" pursued by Moscow.

And in a final shot, Yushchenko accused both candidates in the February 7 runoff, Yanukovych and Prime Minister Yulia Tymoshenko, of being Moscow's puppets.

Tymoshenko served two spells as Yushchenko's prime minister, was his ally in the orange revolution, but they have long since become bitter rivals. Asked why he criticized Tymoshenko more than Yanukovych during the election race, the president said the premier was now more dependent on Moscow.

"Tymoshenko and Yanukovych in the runoff vote was the best project Russia has had since 1991," he added, reprising an accusation from his campaign.