Yanukovych opens door to Russian navy keeping base in Ukraine 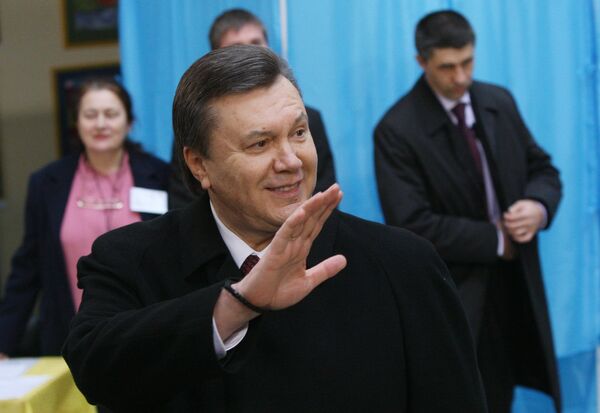 © RIA Novosti . Alexei Kudenko
/
Go to the mediabank
Subscribe
International
India
Africa
Viktor Yanukovych, the expected next Ukrainian president, says he cannot rule out Russia's Black Sea Fleet remaining in Ukraine after its lease on the Sevastopol naval base expires in 2017.

Viktor Yanukovych, the expected next Ukrainian president, says he cannot rule out Russia's Black Sea Fleet remaining in Ukraine after its lease on the Sevastopol naval base expires in 2017.

Preliminary results showed Yanukovych narrowly winning Ukraine's presidential election, and although the official count has not been released he has been congratulated by world leaders including the Russian and U.S. presidents.

The Party of Regions leader is expected to move Ukraine away from the determinedly pro-Western stance of President Viktor Yushchenko, who vowed that Russia would have to find a new main base for its Black Sea Fleet once the current deal expires.

"I do not rule it out," Yanukovych said in an interview with the Russia 24 TV news channel when asked if the Black Sea Fleet could remain in the Crimean port of Sevastopol after 2017.

"We will discuss this issue in the near future. This matter will not be decided at Russia's expense, it will be decided in the national interests of Ukraine. We will find a solution," Yanukovych said, noting that there were many issues involved that needed addressing.

He added that Ukraine's relations with NATO are currently well-defined, and said they would not be expanded. Yushchenko stoked Russia's ire with his pursuit of NATO membership, but despite strong U.S. support many alliance members were lukewarm on the idea.

NATO Secretary General Anders Fogh Rasmussen on Friday congratulated Yanukovych on his election as president and said the alliance was "committed to deepening our strategic partnership with Ukraine."

Yanukovych said on Friday that there was "no question of Ukraine joining NATO," telling Russia's Channel One that Ukraine supported Russian President Dmitry Medvedev's proposals for a new European security architecture, and he reiterated the point on Russia 24 on Saturday.

He said the issue of Ukrainian membership of NATO might "emerge at some point, but we will not see it in the immediate future."

"If it does arise, it will be decided by a national referendum," he added.

"I think that the initiative of Russian President Dmitry Medvedev on the preparation of a new European security concept...is one in which we are willing to participate," Yanukovych said.

Yanukovych defeated his bitter rival Prime Minister Yulia Tymoshenko by a mere 3.5% in Sunday's polls, with official results to be announced by February 17.