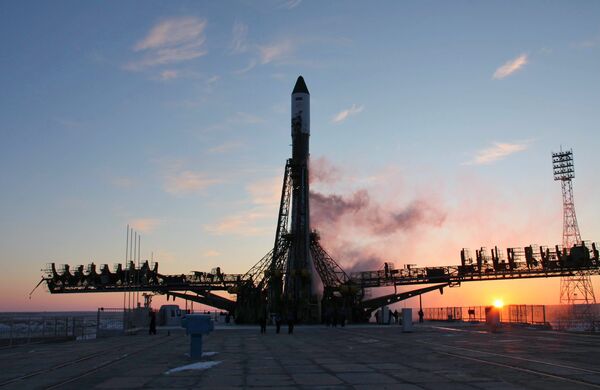 On February 12, 1955, the first military construction units arrived at Tyura-Tam railroad siding (station) to launch the construction of a new missile test range - Scientific-Research Test Range No. 5 of the Soviet Defense Ministry (NIIP-5), currently known as the Baikonur Space Center.

The need for a new test range became evident after the Soviet Union began to develop its own intercontinental ballistic missiles (ICBMs). The Kapustin Yar test range near Astrakhan, southern Russia, was located in a more densely populated area and could not therefore be used for ICBM tests.

The new missile test range was located further south for the equatorial launch advantages. A space rocket lifting off near the Equator is subjected to lower gravity and can thus place in orbit larger and heavier payloads.

The Tyura-Tam settlement and the nearby railroad station matched the requirements better than other locations. Apart from purely technical standards, the new test range minimized possible economic losses. The range was located in a sparsely-populated semi-desert area with sand berms and salt lakes. Consequently, there was no need to close operating farms.

However, the technical and economic advantages were offset by an adverse and purely continental climate notorious for its tremendous annual temperature fluctuations exceeding 80 degrees Celsius, with biting winds and extreme temperatures as low as minus 40 degrees Celsius in winter, and 45-degree heat and sandstorms in summer.

Along with the test range, construction began on the top-secret town of Leninsk, which was unofficially called Zarya (Dawn), though all mail was addressed to Kzyl-Orda-50, and later to Tashkent-90.

The first launch pad, used to send the first man to space, Yury Gagarin (1934-1968), whose construction began in July 1955, is still in use today. Test launches of R-7 Semyorka (SS-6 Sapwood) ICBMs commenced in 1957. Although the May 15 and July 12 launches were abortive, the third R-7 missile successfully lifted off on August 21, and its dummy warhead hit a target at the Kura test range on the Kamchatka Peninsula, Russia's Far East.

On October 4, 1957, an R-7 ICBM ushered in the Space Age by orbiting Sputnik-1, the first man-made satellite. The Vostok-1 spacecraft was launched by another R-7 missile on April 12, 1961, taking Yury Gagarin into space.

That same day, the media mentioned the Baikonur Space Center for the first time. However, the town of Baikonur was actually located several hundred km to the north in Kazakhstan's Karaganda Region where a subterfuge test site had been built to keep a theoretical enemy guessing. Leninsk was renamed Baikonur in 1995, four years after the break-up of the Soviet Union.

Kazakhstan currently leases the Baikonur Space Center and the nearby town to Russia under a contract, which is due to expire in 2050. Moscow pays $115 million annually in rent to Astana. In addition to the John F. Kennedy Space Center at Cape Canaveral in Florida in the United States and China's Jiuquan (Chanchencze) Satellite Launch Center (JSLC), Baikonur launches manned space missions.

The test range, which facilitated military projects in the past, has now been transferred to Russia's Federal Space Agency (Roskosmos). The military continue to render assistance in launching defense satellites. All Russian ICBMs are currently test-fired from the Plesetsk Space Center in the Arkhangelsk Region, while converted ICBMs are launched from their respective silos.

Despite its friendly relations with Kazakhstan and Baikonur's convenient location, Russia considers it expedient to launch subsequent manned missions from its new Vostochny (Eastern) Space Center in the Amur Region, scheduled to be completed by 2016. All new Russian spacecraft will be launched from Vostochny, after the Baikonur lease contract expires.

Speaking of Baikonur's prospects, the Baiterek launch facility, now under development there, will eventually orbit Angara launch vehicles. If implemented, the Baiterek project will preserve Baikonur as an attractive commercial-launch site for the next few decades. It is common knowledge that Kazakhstan is also studying various options for Baikonur after the lease contract expires.

However, there is still a lot of time left until 2050. Consequently, it is impossible to accurately predict Baikonur's future in our rapidly changing world.

Moscow continues to gradually withdraw from Baikonur. The influx of Russian citizens dropped sharply after the troop pullout. Russians now account for 30-40% of the town's 60,000 residents, and the share is declining steadily.