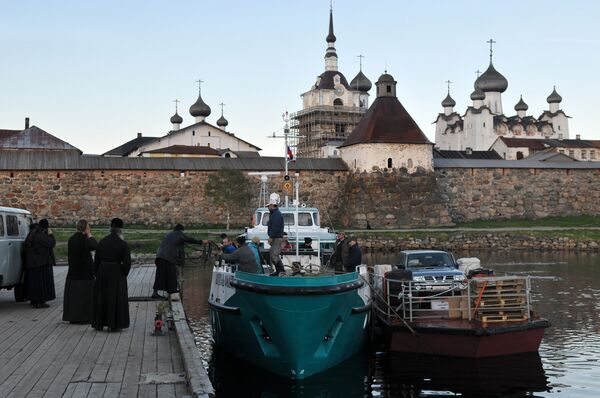 © RIA Novosti . Sergey Ermokhin
/
Go to the photo bank
Subscribe
Church property confiscated by the Soviet authorities must be returned despite the complexity of the issue, the deputy head of the Kremlin administration said on Friday.

Church property confiscated by the Soviet authorities must be returned despite the complexity of the issue, the deputy head of the Kremlin administration said on Friday.

The statement comes as the government works on a bill to return religious archives, relics and buildings to their original owners.

The prospect has raised alarm among art historians and museum administrators, who say that no feasible scheme has yet been worked out and worry about uncertainties over who will be responsible for looking after the property.

Alexander Beglov, who heads a governmental working group on maintaining objects of cultural significance, admitted there were "some problems" but stressed that they must work towards more viable legal structures.

"Perhaps it shouldn't happen so quickly, but I think there are good reasons for it and a tendency towards it," Beglov said.

"My personal opinion is positive. [The property] should be returned," he added.

The issue was raised during a meeting between Russian Prime Minister Vladimir Putin and Patriarch of Moscow and All Russia Kirill earlier this year, when they discussed plans to change the ownership structure of the property used by religious groups, including buildings and land plots.

In almost two decades since the collapse of the officially atheist Soviet Union, the Orthodox Church has through government decrees regained ownership of just 100 or so of 16,000 churches and cathedrals.

While the Orthodox Church will not get back churches now on the UNESCO world heritage list, including St. Basil's Cathedral on Red Square and the churches within the Kremlin walls, it is expected to have Moscow's Novodevichy Convent returned to it later in 2010.

Most religious buildings in Russia are currently rented from the government free of charge, but the economics ministry has sought to change the ownership structure of property used by religious groups in a bid to cut budget spending.

Muslim and Jewish groups have welcomed the proposals, and the Roman Catholic Church in Russia has also expressed hope that it will get back Catholic churches and cathedrals built before 1917.