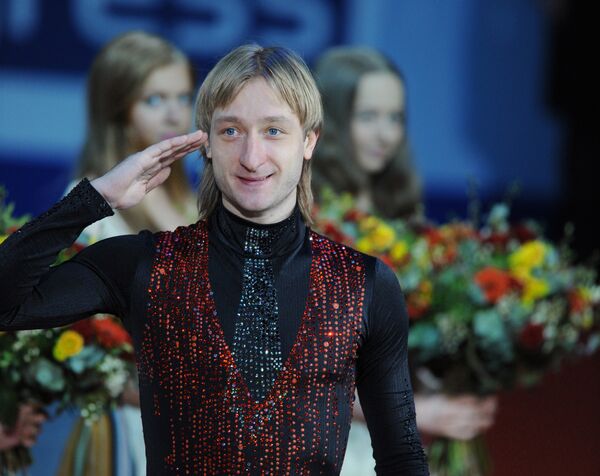 © RIA Novosti . Ilya Pitalev
/
Go to the photo bank
Subscribe
Evgeni Plushenko is in good shape to win the Olympic gold and is ready to face pressure on the ice and beyond in Vancouver, the coach training the legendary Russian figure skater said on Thursday.

Evgeni Plushenko is in good shape to win the Olympic gold and is ready to face pressure on the ice and beyond in Vancouver, the coach training the legendary Russian figure skater said on Thursday.

"Zhenya (shortened name of Evgeni) is in the right mood, he is in good physical shape and has his skills. He just needs a little luck," Alexei Mishin said at a Moscow airport before departing for Canada.

Mishin said the Russian figure skating team is "powerful" enough, but winning Olympic prizes will be difficult as a fierce fight will break out on the rink and around it.

"We are prepared to face pressure. I do not expect a warm welcome. The Russian team is very strong, therefore we face a struggle on the skating rink and beyond," Mishin said in an apparent reference to the 2002 Olympic judging controversy involving the Russian and Canadian pairs figure-skaters.

The scandal in Salt Lake City, when a French judge admitted bias in favor of Russia's Yelena Berezhnaya and Anton Sikharulidze, led to a major scoring overhaul. Jamie Sale and David Pelletier were also awarded gold medals after a furious debate that engulfed the Games for nearly a week.

Plushenko, the 2006 Olympic winner and three-time world champion, denied an interview on Thursday saying it was bad luck. "I do not give interviews before major competitions," he said.

The 27-year-old returned to the ice late last year - after a three-year retirement he himself imposed following his stunning performance in Torino - easily winning an international Moscow cup in October and the Russian national championship in December. He also triumphed at last month's European Championships.

In an earlier interview, Plushenko said he hopes to perform two quadruple jumps in his free skating program in Vancouver.