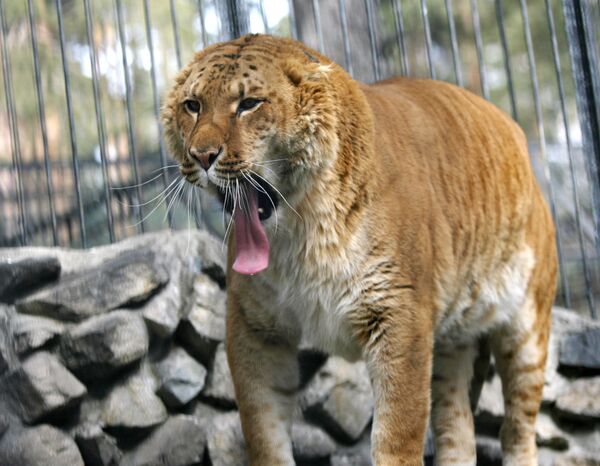 © RIA Novosti . Valeriy Titievskiy
Subscribe
A strange mixture of lion and tiger dwelling in a Siberian zoo could revive the lion that inhabited south Africa since Biblical times until it became extinct 100 years ago.

A strange mixture of lion and tiger dwelling in a Siberian zoo could revive the lion that inhabited south Africa since Biblical times until it became extinct 100 years ago.

Zoo officials hope six-year-old Zita the ligress could breed with a lion in the Novosibirsk Zoo, who is believed to be a descendent of the big scary-looking black-maned beast that roamed the slopes of Cape Province and modern Cape Town.

"Cape Lions were considered extinct, but specialists dealing with endangered species in Africa saw pictures of the lions in our zoo. They recognized the subspecies that once inhabited their territory," zoo official Rosa Solovyova said.

The Cape Lion, distinguished from ordinary lions by their thick black mane and belly hair, was considered extinct after the last known animal was shot in 1858.

The massive animal, which could reach three meters in length and weigh up to 250 kg, bore a striking resemblance to Barbary lions Roman emperors brought from North Africa to torture Christians during Roman games.

The would-be couple mate is now only a cub. The two animals could be paired in about a year, the zoo official said. "They need to get acquainted after which we will make a decision," Solovyova said.

The ligress, a "love child" of an African lion and Bengal tigress, cannot have liger cubs due to genetic peculiarities of the hybrid.

Two cubs of the possible Cape lions from Novosibirsk, where the black-maned animals were accustomed to Siberian winter temperatures that drop to minus 40 degrees Celsius, were brought to South Africa for breeding in 2001.