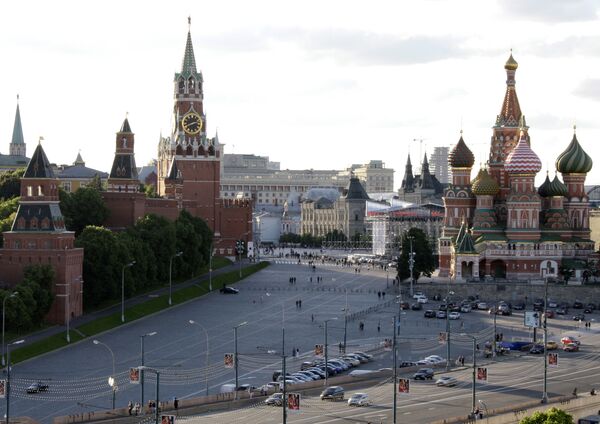 © RIA Novosti . Anton Denisov
/
Go to the photo bank
Subscribe
Russian photographers have welcomed the lifting of restrictions on photo and video shoots in the Kremlin and Red Square.

Russian photographers have welcomed the lifting of restrictions on photo and video shoots in the Kremlin and Red Square.

The Russian Federal Protection Service, or FSO, said on Tuesday video and photo camera shoots using professional standard equipment will be permitted in Red Square and in the Kremlin compound unless they are for commercial purposes.

The change came about after Russian photographer Dmitry Ternovsky wrote in his Internet blog that he had managed to complain about strict rules on the use of professional equipment in the Kremlin to Russian President Dmitry Medvedev, whom he met in the Krasnaya Polyana mountain ski resort in Russia's Caucasus.

Medvedev subsequently instructed the FSO to consider lifting the restrictions.

"I am glad that I have at least managed to do something, but at the same time I am disappointed," Ternovsky told RIA Novosti.

"My issue...was also about the fact that in the centre of Moscow - and there are 159 streets on the list - it is forbidden to get a camera out," he said, adding that train and subway stations were also on the list.

"In other countries I can freely get my camera out anywhere and take photos - train and subway station employees pose for me and everything is fine," he continued.

Reuters photo reporter Denis Sinyakov said that the decision on lifting the restrictions was a "triumph for common sense" and he hopes that it will not be revoked in future.