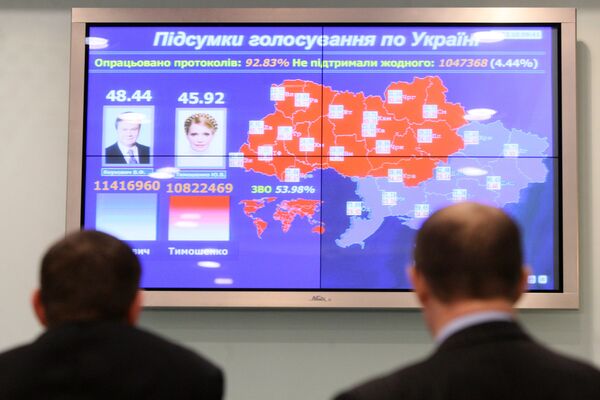 The gap between opposition leader Viktor Yanukovych and Prime Minister Yulia Tymoshenko has narrowed to 2% and continues to fall rapidly following Sunday's presidential runoff in Ukraine, while preliminary statistics show several regions supporting one of the two candidates almost unanimously.

According to countrywide statistics, Yanukovych gained about 48% of the vote, and Tymoshenko garnered some 46%, with over 95% of the ballots counted.

Meanwhile, preliminary data show that most of the residents of the country's eight southern and eastern regions and the Crimean peninsula voted for Yanukovych, while 16 Ukraine's western and central regions and the capital, Kiev, supported Tymoshenko.

Yanukovych, the leader of the pro-Russian Party of Regions, received 80% of the vote in the Crimea, 84% in the Crimean city of Sevastopol, 91% in the Donetsk region, and 89% in the Lugansk region.

Tymoshenko, one of the leaders of the 2004 Orange Revolution, gained 87%, 88%, 84% and 72% in the Ivano-Frankivsk, the Ternopil, the Lviv and the Vinnitsy regions, respectively. She was also supported by 65% of the voters in the country's capital, Kiev.

Some analysts say a recent decision by Yushchenko to declare late Ukrainian nationalist leader Stepan Bandera the Hero of Ukraine could have contributed to the East-West split in the country.

Bandera, a leader of the Ukrainian national movement in Western Ukraine and the head of the Organization of Ukrainian Nationalists (OUN) in 1941-1959, is a controversial figure in Ukraine. He was accused by the Soviet authorities of numerous acts of murder and terrorism, but his mainly west Ukrainian supporters consider him a hero.

Yushchenko's move fueled fierce debate in the former Soviet state. Although Yanukovych has not openly condemned the president's January 22 decree, which sparked a wave of protests in the country's east, he said the new Ukrainian president should be the leader of the whole country, not of only one of its parts.

Tymoshenko supported Yushchenko's move, and as a result, the country's nationalists called for "all conscientious Ukrainian patriots" to vote for the prime minister to "overcome pro-Moscow Yanukovych."

Yanukovych has pledged to unite the country.

"In these elections, I believe that we have taken the first step towards the unification of the country," he said.