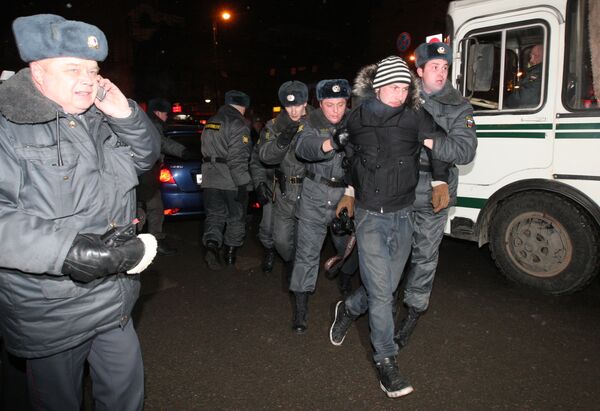 Moscow police detained some 100 people, including several prominent opposition leaders, after an unsanctioned rally in downtown of the Russian capital, a police official said.

"After repeated requests to stop the rally, police detained about 100 people, including Boris Nemtsov, Eduard Limonov and Oleg Orlov," he said.

The protesters said they gathered to show that the authorities are violating the Russian Constitution, which grants the right to assemble peacefully.

Biryukov also said that protesters came to Triumfalnaya Square choosing the venue despite warnings that the protest would only be allowed at other sites.

In a similar crackdown on protesters on the Triumfalnaya square just hours before the New Year Moscow police arrested 82-year-old head of the Moscow Helsinki group, Lyudmila Alexeyeva, prompting criticism from the United States and European human rights organizations..

Nemtsov, who served as deputy premier from 1997 to 1998, is a leading member of Russia's political opposition and is known for his criticism of Prime Minister Vladimir Putin’s policies.