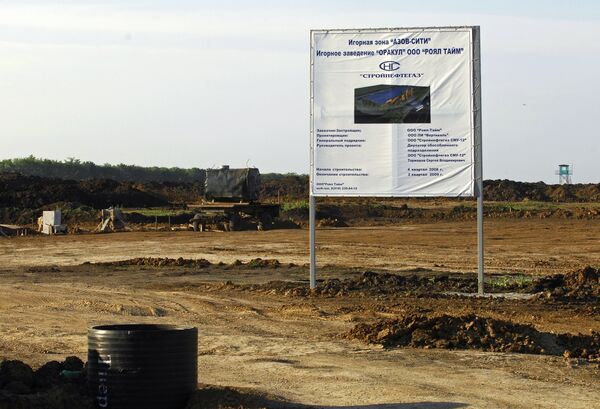 © RIA Novosti . Mikhail Mordasov
/
Go to the photo bank
Subscribe
Russia's first casino in a special gambling zone will open on Saturday in southern Russia, seven months after all gambling establishments had to close or relocate to four designated areas.

Russia's first casino in a special gambling zone will open on Saturday in southern Russia, seven months after all gambling establishments had to close or relocate to four designated areas.

Under a 2007 law, which came into force on July 1, 2009, casinos and other gaming establishments can operate only in four far-flung areas — in the Baltic exclave of Kaliningrad, south Siberia's Altai Territory, Primorye in the Far East, and in southern Russia.

The casino, ran by the Royal Time company from Russia's Volga Republic of Tatarstan, will now offer a slot machine arcade, a casino and a VIP casino hall to its visitors. A restaurant and a free bar with snacks and coffee will also be available.

"Four months after the casino would start its work, the company expects to have up to 500 visitors daily," marketing director Valery Saparin said.

The gambling industry had asked for a delay to the casino closures and their relocation, saying the zones situated in remote poorer regions would not attract many visitors, and the designated areas needed several more years of development.

Medvedev rejected a delay last May although officials had admitted that it would take four or five years to launch the zones.

The Azov City gambling zone, located on the Azov sea coast some 70 km (44 miles) from Rostov-on-Don, 150 km (93 miles) from Krasnodar and 300 km (186 miles) from the 2014 Winter Olympic host city of Sochi, is now far ahead its three rivals. The construction of the second casino is due to begin in March.

In mid-January a first investor bought two plots of land in the Altai gambling zone. No investors were found for the remaining two areas.