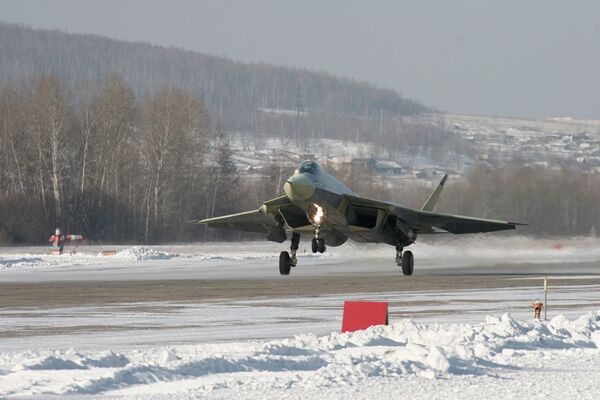 This is the first warplane completely designed and built in Russia since the break-up of the Soviet Union. Only the United States currently operates Lockheed Martin/Boeing F-22 Raptor Stealth air-superiority fighters.

In 1981, the Mikoyan Design Bureau started developing the I-90 aircraft, better known as the Multifunctional Fighter (MFI). The project was launched soon after the MiG-29 Fulcrum, MiG-31 Foxhound and Su-27 Flanker fourth-generation fighters performed their first flights.

The I-90 which was to have been mass-produced in the 1990s overtook the U.S. Advanced Tactical Fighter (ATF) program which later gave rise to the F-22 Raptor.

Curtailed defense spending in the late 1980s and the subsequent break-up of the Soviet Union stopped the MFI program in its tracks. Flight tests planned for 1991 -1992 did not take place. Consequently, the MFI first took to the skies in 2000.

A prototype Sukhoi S-37/Su-47 Berkut fifth-generation fighter had been developed by then.

In 1998, the Russian Air Force issued a new request for proposal (RFP) for a fifth-generation fighter. As a concept it had remained unchanged since the MFI program got underway.

The old designs were scrapped, and it was decided to develop an entirely new warplane fully taking into account the F-22's capabilities, merits and drawbacks.

In 2002, the Sukhoi Design Bureau won the pilot-project contest, after proposing a full-size and twin-engined fighter with a take-off weight of up to 35 metric tons under its Prospective/Promising Frontline Aviation System program (PAK FA program).

Given this new program's complexity and the scale of the scientific, engineering, organizational and financial problems that had to be tackled during the new plane's creation, this delay is quite understandable.

All these problems are caused by Russia's crisis-ridden industry.

The new aircraft is designated the T-50, Product 701 or the I-21. The Indian Air Force also displayed an interest in this program soon after it was launched.

At first, New Delhi preferred the lighter and simpler Mikoyan-Gurevich MFI fighter. The Russian Aircraft Corporation MiG proposed the twin-engined and bobtailed I-2000, an upgrade of the basic MiG-29 model, and a single-engined aircraft closely resembling the Lockheed Martin F-35 Lightning II, a descendant of the F-35, which came out of the Joint Strike Fighter (JSF) program.

India wanted to receive this sophisticated aircraft as soon as possible therefore had no choice but to join the PAK FA program. The Indian version will feature a two-seat cockpit, a number of electronic systems and other auxiliary equipment.

These aircraft are expected to replace the Su-30MKI Flanker-H fighters currently serving with the Indian Air Force, in the 2020s and the 2030s. Moreover, it is likely they will be mass-produced in India.

The latest test flight reaffirms Russia's status as a leading aviation power. Only Russia and the United States currently have their own fifth-generation fighters, as well as aircraft industries capable of manufacturing all types of military and civilian aircraft ranging from light-weight aerobatic planes to strategic bombers.

All other countries, including France, Sweden, the EU as a whole, China and Japan, lack these capabilities and are forced to implement various cooperation plans in order to develop new-generation aircraft.

The future for new Swedish and French aircraft remains bleak. Both the Saab JAS 39 Gripen and the Dassault Rafale rank among the generation four-plus-plus warplanes. Neither Stockholm, nor Paris can afford to implement multi-billion-dollar fifth-generation fighter programs.

China's prospects also seem doubtful. Most analysts agree that Beijing can develop a fifth-generation warplane only if it utilizes foreign, notably Russian, experience.