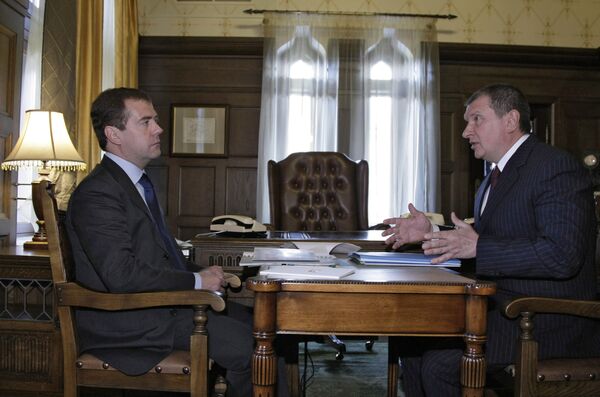 Russia and Belarus have signed an array of agreements on crude oil deliveries and uninterrupted transits to Europe, a Russian deputy prime minister said on Wednesday.

Russia and Belarus have signed an array of agreements on crude oil deliveries and uninterrupted transits to Europe, a Russian deputy prime minister said on Wednesday.

Igor Sechin said the deals included "amendments to an agreement on oil deliveries to Belarus, oil pricing procedures, and a joint statement on oil transit guarantees."

Russian oil supplies via the ex-Soviet republic have continued throughout the dispute. A spat between Moscow and Minsk in 2007 led to disruptions in supplies to Poland and Germany.

Speaking at a news conference after the talks, Semashko confirmed Minsk would receive 6.3 million metric tons of oil duty-free this year, but the volume could rise later depending on the country's economic performance.

Belarus consumes an estimated 8 million tons of oil a year, while its own production amounts to 1.7 million.

Semashko said they also agreed to increase transit tariffs every year based on an agreed-on formula, and the fee could rise 11% this year.