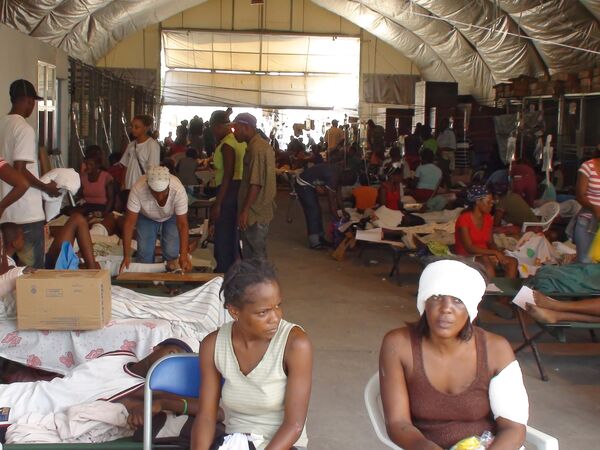 The UN World Food Program (WFP) has prioritized women in Haiti food aid distribution to ensure that the most vulnerable get access to aid.

The UN World Food Program (WFP) has prioritized women in Haiti food aid distribution to ensure that the most vulnerable get access to aid, the WFP executive director told a news conference on Tuesday.

Josette Sheeran, who has recently returned from Haiti, said the move was in order to provide the most vulnerable with access to food as when things go out of control at distribution points, women and children are generally pushed aside.

"It is our methodology to distribute only to women to ensure that food gets to women and children in Haiti," she said. "Every time we have not had adequate security escorts, we have had riots at food sites."

The official added that the collapse of communication and road systems made the post-disaster efforts in Haiti one of the most challenging tasks the WFP has faced in more than 40 years of relief operations.

"The supply chain of food getting in is a nightmare," Sheeran went on. "Haiti's infrastructure was not that strong to start with, but what they had, in many cases, is completely obliterated and broken down."

Despite all difficulties, the agency has already delivered eight million meals, some 80% of them in the country's capital, Port-au-Prince, where the majority of the affected population lives.

The 7.0 magnitude earthquake devastated the impoverished Caribbean nation on January 12. Estimates as to the final death toll in the earthquake range up to 200,000. Over 150,000 bodies have so far been collected in the in and around Port-au-Prince.