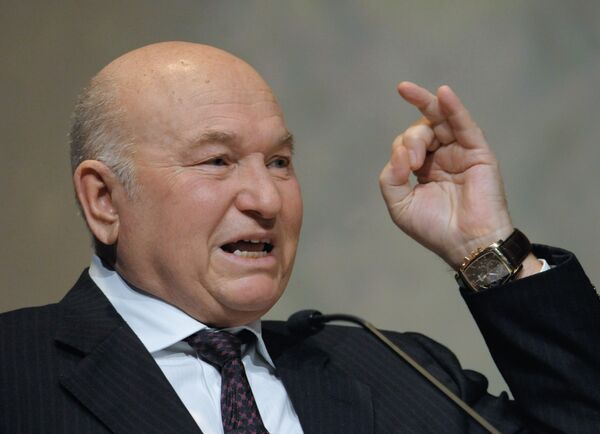 © RIA Novosti
/
Go to the photo bank
Subscribe
Moscow mayor Yury Luzhkov, known for his negative attitude toward sexual minorities, said Monday he will not allow gay parades in the Russian capital, calling them "satanic."

Moscow mayor Yury Luzhkov, known for his negative attitude toward sexual minorities, said Monday he will not allow gay parades in the Russian capital, calling them "satanic."

"We have banned such parades and will ban them in future as well! Everyone must accept this not as a theorem but as an axiom," Luzhkov said during Christmas educational readings in Moscow.

The city chief in the past has resisted pressure from rights campaigners to allow gay parades in Moscow.

In June 2009, during the Facing the City talk show on the TV-Center channel, Luzhkov used the word "homos" (gomiki, in Russian) when referring to members of the gay community. Gay activists said the word was offensive and sued the mayor over the incident, but a Moscow court rejected their claim.

An attempt to hold an unauthorized parade to coincide with Moscow's hosting of the Eurovision Song Contest in May was swiftly dispersed by police, while a march in May 2007 saw participants attacked by members of radical groups. More than 30 people were briefly detained.

Activists have called the bans illegal and threatened to sue the authorities through the European Court of Human Rights if need be.

Luzhkov also said there was a "crisis of faith" in the world, which, he said, included the blessing of homosexual marriages, and "sexual aids" with "pictures, one glance at which insults the soul of even an adult" which are "lethal moral poison" for children.

"We cannot complacently watch numerous displays of blasphemy under the guise of creative work or freedom of speech," the mayor said.

He said propaganda of same-sex relations was inadmissible and urged the fight against drug trafficking.

The mayor also said there could be no place for discussions of "human rights and universal values" in these cases, and urged harsh measures in the fight against immorality.