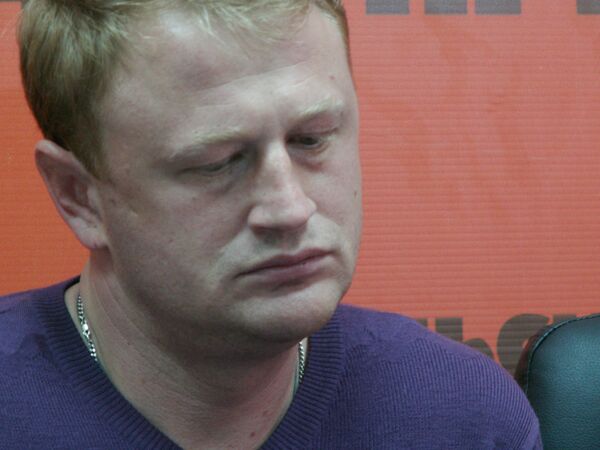 New charges have been brought against a Russian police officer who posted video messages online urging a nationwide crackdown on corruption, a top investigator said on Wednesday.

New charges have been brought against a Russian police officer who posted video messages online urging a nationwide crackdown on corruption, a top investigator said on Wednesday.

Police Major Alexei Dymovsky from the Black Sea port of Novorossiisk in Krasnodar Territory posted two videos last September on his website accusing his bosses and colleagues of corruption. Dymovsky addressed his expose to Prime Minister Vladimir Putin. The recording was also posted on YouTube.com with English subtitles.

"A preliminary investigation is ongoing," said Vladimir Markin of the Prosecutor General's Office investigations committee, adding that Dymovsky had been ordered not to leave his home city "as a measure of preventive restraint."

Dymovsky confirmed to RIA Novosti by telephone that a Krasnodar Territory investigator had formally charged him with fraud but declined to issue him a copy of the list of charges.

He said the charge was unclear and involved "a sum of not more than $800."

He said he would meet with the investigator again to press for clarification of the charge and formal evidence against him.

In the video, Dymovsky said department chiefs forced officers to solve nonexistent crimes and even "jail innocent people" to pad statistics. He complained that ordinary staff were treated "like cattle," had no days off or sick leave, and said young people joined the police on a 12,000 rubles monthly wage ($413) because they knew they would have "tributes."

Dymovsky was swiftly fired for "libel and action that tarnishes the police force."

Interior Minister Rashid Nurgaliyev, who vowed last August to eradicate corruption in his ministry within a month, ordered a federal probe into Dymovsky's claims.

This and other scandals prompted President Dmitry Medvedev in December to order wholesale reform of the Interior Ministry, trimming police numbers and raising salaries in an effort to reduce corruption.