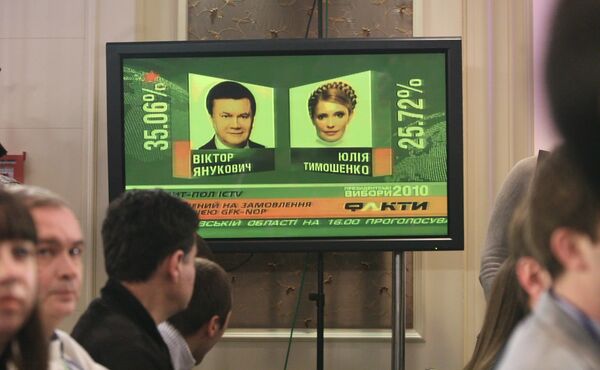 How have the sympathies of Ukrainian voters changed after the first round of the January 17 presidential elections?

How have the sympathies of Ukrainian voters changed after the first round of the January 17 presidential elections?

Prime Minister Yulia Tymoshenko did not take part in the 2004 presidential elections because she actively supported Viktor Yushchenko at that time.

Consequently, her results compare with those scored by the Yulia Tymoshenko Bloc (BYUT) in the 2007 elections to the Verkhovna Rada (Parliament).

At that time, BYUT received 30.71% of votes. Right now, the Ukrainian Central Election Commission estimates that Tymoshenko is supported by just over 25%, a 5%-plus decline.

Although her campaign headquarters predicted a landslide victory, this forecast did not come true. Tymoshenko suffered the main setback in Kiev, which is dominated by her electorate.

Although BYUT received 46.18% of votes in the Ukrainian capital in 2007, Tymoshenko was now supported by just 36% of local voters.

Tymoshenko also received fewer votes in most eastern and southern Ukrainian regions on 2007.

She is in no position to expect the defection of other candidates' voters in the run-up to the second election round.

For instance, Verkhovna Rada Speaker Volodymyr Lytvyn is mostly supported by rural residents who are unlikely to side with Tymoshenko.

But to some extent she can count on the Interior Ministry personnel, the largest national security agency headed by one of her closest supporters Yury Lutsenko.

Viktor Yanukovych, the current leader of the influential opposition Party of Regions in the Verkhovna Rada and Tymoshenko's main rival, received over 35%, which is less than in the 2004 presidential elections (39.26% in the first round).

Nevertheless, Yanukovych has managed to preserve his influence in eight eastern and southern Ukrainian regions, the Crimea and Sevastopol. He has also won first place in Ukraine's westernmost Carpathian region.

As far as central Ukraine is concerned, Yanukovych's results largely compare with the 2007 Rada elections.

The total defeat of the current president Viktor Yushchenko has made Yanukovych's victory possible. Yushchenko's call not to support any of the candidates may deprive Tymoshenko of several vitally important percentage points of the "democratic electorate."

At the same time, Yanukovych will inevitably be supported by the electorate of Ukrainian Communist leader Petro Simonenko, who received 3.54% votes in the first round.

All contenders will also have to court the electorate of Ukrainian banker Serhiy Tyhypko, who received over 13% of votes on January 17.

Many analysts are now inclined to think that Tyhypko owns a veritable "golden share" and that the name of Ukraine's fourth president depends on his choice.

Although Tymoshenko's campaign headquarters tried hard to portray Tyhypko as an unviable candidate, it was her former supporters who now turned to him. This came as an unpleasant surprise for Tymoshenko.

Moreover, it appears that Tymoshenko and Tyhypko have conflicting business interests.

Relations between Tymoshenko and Kolomoysky were soured some time ago, probably due to his refusal to finance Tymoshenko's election campaign.

On the eve of the election, Tymoshenko's authorized spokesperson said she would nationalize Privat assets in the Ukrainian oil industry. As this may directly affect Tyhypko's interests, he is unlikely to support Tymoshenko.

Yanukovych and Tymoshenko, who have made it into the second round, must do their best to win the support of undecided voters accounting for about 10% of the entire electorate.

One can safely say that the campaign headquarters of both Tymoshenko and Yanukovych will prioritize this issue in the run-up to the second round of presidential elections, scheduled to be held on February 7.

Innokenty Adyasov is a member of the expert analytical council at the Russian State Duma's CIS affairs committee.