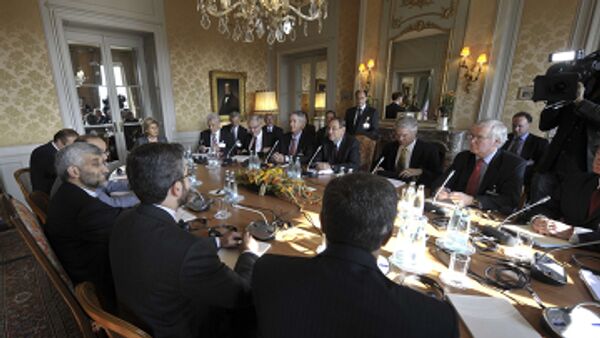 Washington is satisfied with last week's talks of Iran Six in New York, however it still views Tehran's response on uranium enrichment proposal as "inadequate," a spokesman for the U.S. Department of State said.

Washington is satisfied with last week's talks of Iran Six in New York, however it still views Tehran's response on uranium enrichment proposal as "inadequate," a spokesman for the U.S. Department of State said.

Iran Six participants held a meeting on Saturday in New York where they were supposed to make a decision against new sanctions on Tehran and study new political methods to solve the issues.

"We had a very useful meeting in New York on Saturday within the P-5+1 process, and we will continue to discuss with our partners and a range of countries appropriate next steps and options that might exist going forward," U.S. Department of State Assistant Secretary Philip Crowley told a daily press briefing.

However, he said the U.S. has not so far received an adequate response from Iran concerning an IAEA proposal on the low-enriched uranium.

"There was a statement put out on Saturday that recommits the P-5+1 that we continue to have concerns. We continue to see the Iranian response as inadequate," Crowley said.

Under the IAEA proposal, Iran was to ship its low-enriched uranium to Russia and France for further enrichment and processing into fuel for power plants. Iran would not thereby be able to enrich uranium to make weapons. Iran has not responded as of yet.

According to an EU official, the six nations will continue to seek a diplomatic solution to the issue, but will also begin considering new sanctions

They have been trying to persuade Tehran to halt uranium enrichment it says it needs for electricity generation for economic and diplomatic incentives. The group last met in Geneva on October 1.