Tens of thousands bathe in icy water on Epiphany in Russia 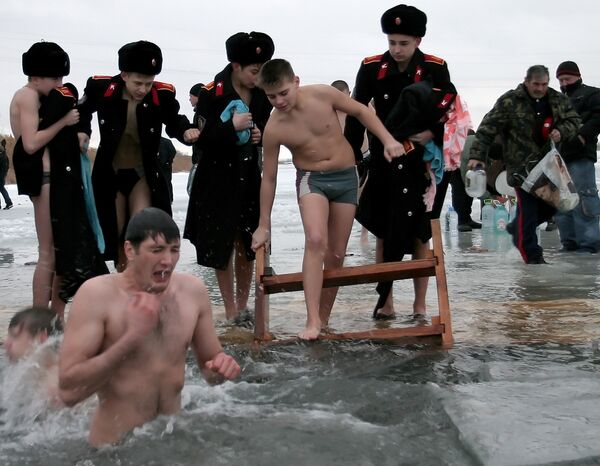 Tens of thousands of people across Russia bathed in icy cold water on Epiphany on Tuesday as air temperatures across the country ranged from plus fifteen to minus sixty degrees Celsius.

Tens of thousands of people across Russia bathed in icy cold water on Epiphany on Tuesday as air temperatures across the country ranged from plus fifteen to minus sixty degrees Celsius.

Epiphany, also known as Theophany, is one of the Great Feasts, marking the baptism of Jesus Christ by John the Baptist in the Jordan River and the beginning of his ministry, and the Russian Orthodox Church celebrates it on January 19 in line with the Julian calendar.

On this day, while honoring an old Russian tradition, believers dive into ice holes, usually made in the form of a cross, in lakes, rivers and other water bodies.

Some 30,000 believers dipped themselves in ice holes in 37 fonts in Moscow where waters were blessed by Orthodox priests during the night, with 260 rescuers monitoring the safety of swimming as air temperature was below minus 20 degrees Celsius.

A Moscow district official and some other 50 people bathed in an Epiphany font in the center of the Russian capital.

"I feel as if I was reborn. This is the first Epiphany bathing in my life and I am sure it won't be the last," Leonid Sidorov, deputy head of Moscow's Central Administrative District, told journalists.

The feast's peculiar feature is the rite of the Great Blessing of Water, performed in Russian churches twice - on January 18, on the eve of the feast, and on Epiphany proper, after Divine Liturgy.

Holy water is then given to believers, who store it for long periods and use it to cure illnesses and bless themselves or things and premises around them. Some people think any water - even from the taps on the kitchen sink - poured or bottled on Epiphany becomes holy.

In southern Russia's city of Sochi, where the air and water temperature is some 12 degrees Celsius, about 3,000 people jumped into the Black Sea and started swimming at midnight on Tuesday to celebrate the feast.

Some 20,000 people dipped into cold water during the night in the city of Nizhny Novgorod in the Volga Federal District.

Vladimir Grebyonkin, the president of Russia's Cold Treatment and Sports Winter Swimming Federation, earlier said it is impossible to fall ill after dipping into icy water on Epiphany as "on Epiphany the crystalline structure of water changes on Earth" and "water self-purifies, so even an unprepared person won't catch a cold."