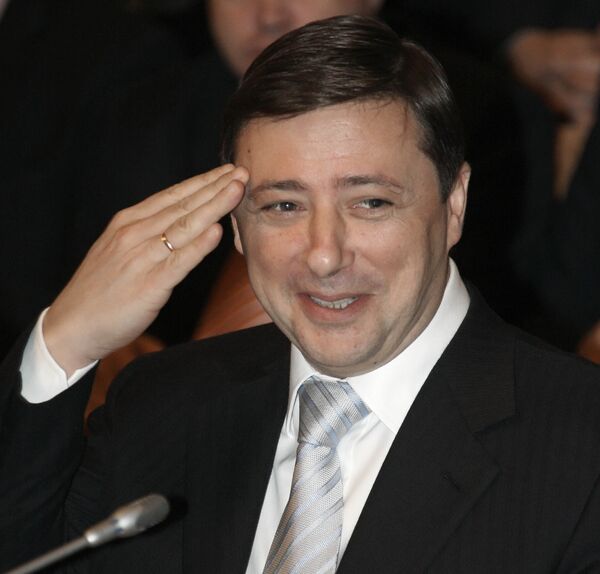 President Dmitry Medvedev on Tuesday named ex-governor of Siberian Krasnoyarsk Territory Alexander Khloponin as deputy prime minister and his personal envoy to the North Caucasus, giving him sweeping powers in the troubled region.

President Dmitry Medvedev on Tuesday named ex-governor of Siberian Krasnoyarsk Territory Alexander Khloponin as deputy prime minister and his personal envoy to the North Caucasus, giving him sweeping powers in the troubled region.

Following is a brief biography of Khloponin.

Khloponin was born on March 6, 1965, in the Sri Lankan capital of Colombo to the family of a translator working for the Soviet trade mission.

He studied in the Moscow Financial Institute in 1982-89.

From 1989 to 1992, he worked in Soviet Vnesheconombank as the head of Government Loans Department.

In 1992, Khloponin joined International Financial Company to become its president in 1996.

On June 28, 1996, the board of directors of Norilsk Nickel company appointed Khloponin as president and CEO.

In 2001, 36-year-old Khloponin became the youngest Russian governor, when he won gubernatorial polls in the Siberian Taimyr district, Russia's center for nickel production.

In 2002, he became the governor of Krasnoyarsk Territory after the death of the previous regional leader, Alexander Lebed, in a helicopter accident. The Krasnoyarsk Territory is more than three times the size of France. The young ambitious governor soon won the reputation of an effective manager by dramatically improving the economic situation in the region.

In 2002, Alexander Khloponin was named Person of the Year by Expert magazine, a Russian business weekly.

In 2007, then President Vladimir Putin, who had made regional governors Kremlin-appointed officials, reconfirmed Khloponin in his post.

Khloponin is a member of the Presidential Council on the implementation of the national priority projects and demographic policy, the Presidential Council on developing local self-government, the Government Commission on the assessment of the performance of the federal and regional state agencies, the State Council working group on infrastructure development in aviation, and the Russian Commission for UNESCO.

He was awarded with the Order of Honor in 1998 and the Order of Service to the Motherland, fourth class, in 2008.

He holds a masters in economics.

Khloponin is married with a daughter born in 1987.