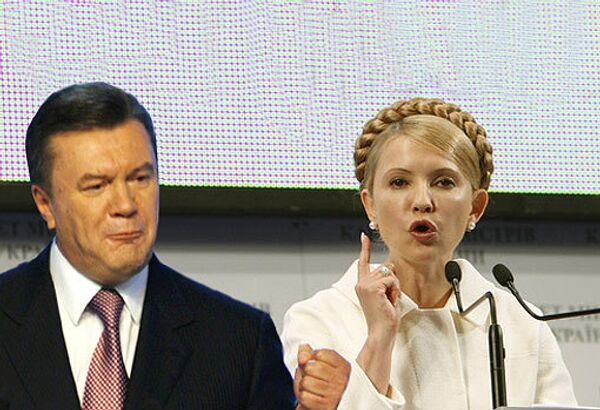 Ukrainian presidential candidate Viktor Yanukovich will most likely win the first round of elections and hold a run-off election with current Prime Minister Yulia Tymoshenko, a political analyst told RIA Novosti on Saturday.

Ukrainian presidential candidate Viktor Yanukovich will most likely win the first round of elections and hold a run-off election with current Prime Minister Yulia Tymoshenko, a political analyst told RIA Novosti on Saturday.

Election campaigning for the 18 candidates came to an end in Ukraine on Saturday, 24 hours before presidential polls.

"Yanukovich will be ahead probably by 12%. Tymoshenko's team is still confident she can catch up, she can still win, but the gap must be small, less than 10%," Andrew Wilson from the European Council on Foreign Relations said.

If election polls on Sunday show a 15% lead in favor of Yanukovich over Tymoshenko, then she will not have a chance in the run-offs, Wilson said. He also said that if Tymoshenko loses the first round by 10%-15% to Yanukovich, then street protests and legal suits will be brought to the country's Arbitration Court by Tymoshenko.

Wilson believes presidential candidate Serhiy Tyhypko, favored in third place, could play a "key figure" in a run-off election between Yanukovich and Tymoshenko. According to the political analyst, Tyhypko is currently taking votes away from Yanukovich, which Tymoshenko needs to secure her position. Tyhypko would ask his constituents to vote for one of the other two candidates in the run-off.

Incumbent President Viktor Yushchenko will receive only 1.5% to 3.5% in the first round, ultimately losing the presidential chair, Wilson said.

Both Yanukovych and Tymoshenko have pledged to improve ties with Russia, soured over Kiev's NATO bid, gas disputes and the former Soviet republic's support for Georgia in the August 2008 war over South Ossetia.

Yanukovych has indicated he would follow Russia in recognizing the former Georgian republics of South Ossetia and Abkhazia if elected, and has also criticized attempts to blame Russia for the 1932-33 famine in Ukraine.