Ukraine must not blame neighbors for famine - Yanukovych 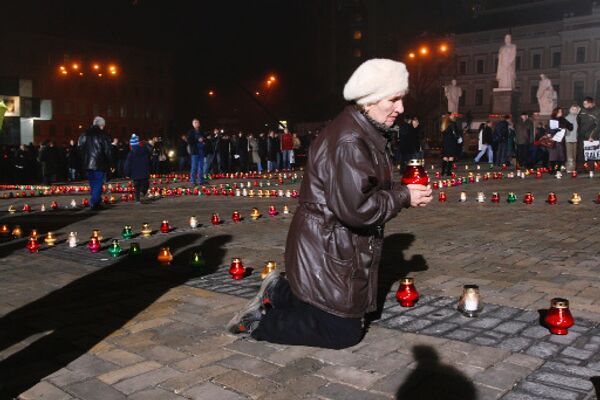 Ukrainian presidential candidate Viktor Yanukovych has said that Kiev's attempts to blame Russia for the 1932-1933 Holodomor famine are unjust.

Ukrainian presidential candidate Viktor Yanukovych has said that Kiev's attempts to blame Russia for the 1932-1933 Holodomor famine are unjust.

Ukraine, which says that more than 3.9 million people died during the famine, has been seeking international recognition of the famine as an act of genocide.

A number of Ukrainian nationalist parties say that Russia, as the legal successor of the Soviet Union, should bear responsibility for the famine.

"Holodomor took place, was denounced and the international society gave an evaluation of the famine, but it was never labeled as a genocide of the Ukrainian people. Ukraine's attempts to do so by blaming one of our neighbors are unjust," Yanukovych said in an interview with the Inter television channel.

Earlier in the week a court in Kiev found Bolshevik leaders guilty of genocide against Ukrainians during the 1932-1933 Holodomor famine.

The court found dictator Joseph Stalin and several other senior Soviet officials guilty, but dropped criminal proceedings "due to the suspects' deaths."

Russia says the famine cannot be considered an act that targeted Ukrainians, as millions of people from different ethnic groups also lost their lives in vast territories across the Soviet Union.

Last year, the United Nations General Assembly refused to include a discussion of the famine on its official session agenda.