'Bush legs' in Russia: from savior to outcast 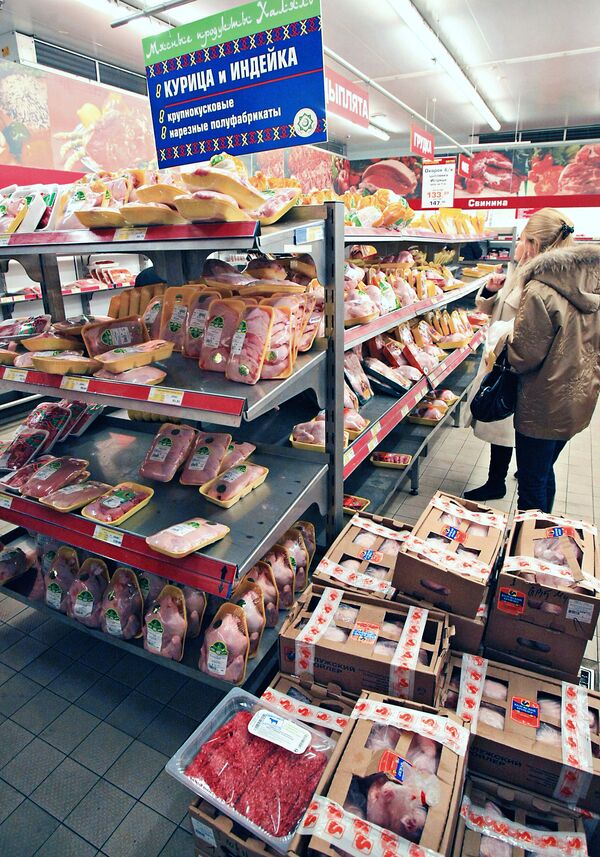 Prime Minister Vladimir Putin's tough warning to U.S. poultry producers has cast a shadow over future imports of a product that has a special place in the history of post-Soviet Russia -U.S. chicken legs.

Prime Minister Vladimir Putin's tough warning to U.S. poultry producers has cast a shadow over future imports of a product that has a special place in the history of post-Soviet Russia -U.S. chicken legs.

Imports of U.S. poultry to Russia began in the early 1990s, under a trade agreement signed by the Soviet Union's last leader, Mikhail Gorbachev, and then-U.S. President George Bush Sr.

The first shipments of chicken legs arrived as a bitter economic crisis gripped the country, emptying the shelves of Soviet supermarkets and forcing the government to introduce elements of food rationing. The specter of famine combined with political instability ultimately led to the collapse of the Soviet Union in 1991.

Used to ill-nourished and generally unappetizing domestic poultry, Russians had never before seen such huge chicken drumsticks, and were quick to dub the new product "Bush legs." Baked, braised or boiled, "Bush legs" have since become part of the everyday diet in poorer households.

"In the long-gone Soviet poverty, I remember my mom bringing home those pink, pan-ready chicken legs. To her great surprise, it turned out that they had no feathers. For me, those legs were ambassadors from a place where people did not have to eat blue-colored and badly plucked chickens... Bush legs are a pleasant memory of my childhood, my mom was glad every time she managed to buy them," a Russian blogger, choco_house, wrote on Livejournal.

Chicken legs still remain a popular and cheap food in Russia. A Russian joke says: "Bush family members come and go, but the legs are forever."

However, as soon as the great commodity deficit of the 1990s was over, Russian public began speculating over the possible dangers of the product, citing excessive levels of hormones, antibiotics, chlorine and other chemicals.

In 1997, the European Union banned U.S. poultry treated with chlorides, and the issue is now being looked at by the World Trade Organization. Five years later, Russia imposed a ban on U.S. poultry imports over salmonella concerns. The ban, however, was lifted a month later.

In 2008, a total of 58 metric tons of U.S.-produced chicken legs were destroyed after tests showed they contained huge amounts of arsenic. Later that year, Russia banned poultry imports from 19 U.S. producers, citing their failure to meet sanitary standards.

This year Russia introduced a law strictly limiting the amount of chlorine that can be used in the processing of poultry, effectively banning all imports from the United States.