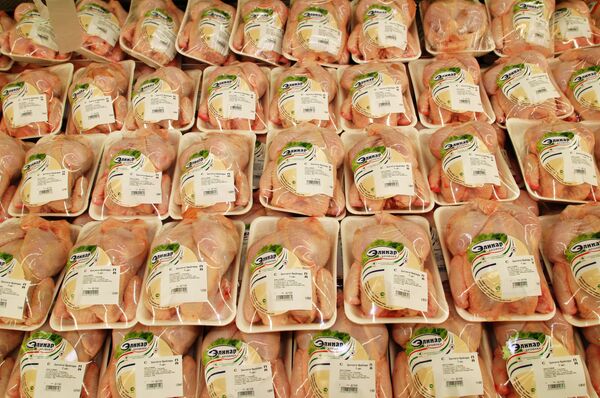 Russian producers are ready for the potential ban on U.S. poultry imports, a spokeswoman for one of Russia's largest meat manufacturers said on Friday.

Russian producers are ready for the potential ban on U.S. poultry imports, a spokeswoman for one of Russia's largest meat manufacturers said on Friday.

Tougher sanitary regulations regarding poultry processing that restrict the use of chlorine and moisture content came into force in Russia January 1. U.S. companies have traditionally used chlorine in poultry processing and will not be able to supply their products to Russia any longer.

"Russian [poultry] producers will increase output and they were ready for [the ban] on the back of earlier forecasts on lower import quotas," Irina Ostryakova from Cherkizovo Group said.

She said Petelinka, one of Russia's key poultry producers and a Cherkizovo subsidiary, had long used air chilling in poultry processing and refused to comment on substitutes for U.S. chlorine-treated chicken.

"We are just taking the path Europe has chosen to improve production," she said referring to the ban on chlorine-rinsed poultry that has been in place in Europe since 1997.

"This is certainly a cause for celebration, that quality requirements for imports are being raised," she said.

She dismissed speculation that the ban would cause a poultry deficit on the domestic market or any price hike.

"We currently have huge reserves of unsold products," Bobyleva said.